We are a nation of dog lovers but as Professor Eric Morgan from Belfast University reminds us; we tend to forget or don’t wish to focus on the less salubrious aspects of canine ownership such as the risk presented not just to public health but the health of our four-legged friends by Toxocara Canis or roundworm.

Roundworm is a parasite that almost all dogs are infected within their lifetime with transmission often beginning from Mother to the puppy who passes them on through her bloodstream or milk. Another way a puppy or adult dog can be infected is from eating an animal such as a dead mouse that has roundworm larvae in its tissues.

Adult roundworms hatch and live in a dog’s intestines, and their eggs passed are passed into the environment through their faeces. Toxocara can then infect people if they ingest these eggs; young children are especially at risk who after playing on grass or in the dirt where dogs have been, then put their fingers in their mouths. These eggs then migrate to organs in the body including the eyes and many people have heard the horror stories of a child blinded by roundworm after innocently playing in a sandpit for instance. Thankfully these instances are rare, but they do happen.

The Disease in Dogs and Cats

Larvae that cross over in the bloodstream via the placenta and milk of nursing dogs and cats can lead to severe respiratory signs after birth as well as ascites and intestine or biliary obstruction.  They can also lead to re-awakened infections in later life. This transmission from the dam to young indicates the increased need for vigorous worming regimes in pregnant dogs and cats and early life worming in their young as well as regular maintenance worming in all adult dogs and cats. 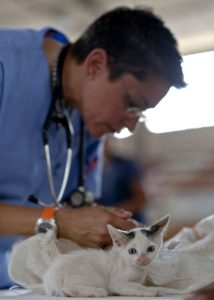 Later Infections in Dogs and Cats

Although circulating roundworm larvae from birth can activate and cause later infections in an adult’s dog and cat’s life this seems to only account for approximately 2-3% of cases. However with adult dogs being more numerous and producing more faeces than younger dogs; the associated increase in egg shedding still represents a risk to public health. 2-3% may seem like a small statistic but when you realise this equates to approximately 4 tones of faeces and 1 billion eggs shed in Bristol alone; then this conjures up a horrifying visual image. Cats tend to show a higher incidence of infection than dogs perhaps because of their predatory nature catching infected rodents and birds hosting Toxocara.

The Importance of Poop Scooping

Of course – most of these eggs will be removed before they have chance to settle in the environment but 20% of soil samples collected from Bristol parks were found to be contaminated with Toxocara eggs, and this will likely represent a similar situation in parks throughout the rest of the UK and Ireland.