The Tonkinese is something of a curiosity among cat-lovers. Today, the breed is largely a result of cross-breeding between Siamese and Burmese animals. But the breed can claim a history that stretches back to 14th century Siam. 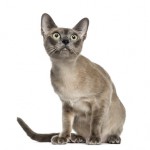 They embody all of the qualities that make their parent breeds so alluring an exotic. But they’ve got a unique appeal all of their own, too. Let’s take a closer look at this most intriguing of Eastern felines.

Profile: What is a Tonkinese?

Tonkinese cats represent a healthy middle-ground between the extreme slenderness of the Siamese and the stocky frame of the American Burmese. They’ve got a slighter appearance than the average housecat, and you could be forgiven for thinking that the cat is quite insubstantial – but this impression will be quickly dispelled when you attempt to pick one up, and realise that they’re deceptively well-muscled.

The Cat Fancier’s Association recognise four different base colours for Tonkinese cats, and these colours each refer to the cat’s so-called bodily ‘points’, these being the face, ears and tail. These colours are platinum, champagne, natural and blue. Moreover, there are three different sorts of coat pattern, which describe various levels of contrast between the colour of the points and that of the main body. These patterns are pointed, mink and solid; they respectively describe high, medium and low levels of contrast. Generally speaking, higher-contrast coat patterns result in bluer eyes, while low-contrast ones result in greenish-yellow ones.

With four different colours and three different pattern varieties to choose from, there are around twelve different sorts of Tonkinese. For example, one might have a champagne mink, a natural solid or a blue point.

History: Where did the Tonkinese come from?

Much of the character of the Tonkinese is described in the Tamra Maew, an ancient Thai book of poems about cats, penned during the Ayudha Period (1358-1767). This book describes twenty-three ancient breeds of cats, seventeen of which bring good luck, and six of which bring bad.

But the breed as we know it today is likely a more modern invention. So-called ‘chocolate Siamese’ cats were brought back to England in the early part of the 19th century, and these cats went on to form the Tonkinese breed in England.

Across the Atlantic, we have more specific details of how the breed was imported. Dr. Joseph Thompson imported a small, walnut-coloured cat – which is now believed to be a crossbreed of Burmese and Siamese cats. This cat was called ‘Wong Mau’, and it’s to her that many Burmese cats in the United States can trace their ancestry.

In the latter portion of the 20th century, breeders wanted to recreate the characteristics of Wong Mau; they therefore bred the two parent breeds with each other to create a moderate breed that had both the ‘mink’ colour scheme and the aqua eyes of its two parent breeds.

By the 80s, outcrossing to Siamese and Burmese was no longer required. While for much of its history the breed was considered a cross, the Cat Fancier’s Association officially designated an established breed in 2001.

Somewhat confusingly, the breed has almost nothing to do with Tonkin, the region of modern-day Vietnam from which it draws its name. This moniker was only decided upon long after the cat had been removed from the region, by western breeders.

Cats have a deserved reputation as free spirits. Unlike dogs, cats will happily go about their business without human interaction (except, of course, for mealtime). There are some breeds, however, where this is not so – and the Tonkinese is one of them.

Like their close cousins the Siamese, Tonkinese cats are extremely friendly and sociable. They crave attention – and aren’t shy about letting their owners know about it. They’ll happily play with any willing creature in their household – whether it’s another cat, a dog or a human. That said, the target of their affections might not be so willing to reciprocate, and so it’s often best to buy Tonkinese cats as a pair – that way both will always have a like-minded playmate to pass the time with. Watching two of these animals play together is an entertaining way to spend a spare few minutes!

This quality makes the breed an excellent choice for households with very young children – you can be assured that the animal is not going to be too upset when the play gets over-gregarious. Tonkinese cats are unlikely to be aggressive; they’re affectionate, intelligent and fun-loving when they’re kittens, and remain so even after they’re all grown up.

Naturally, this friendliness is not such a useful quality in an outdoor cat – after all, the outside world is full of threats, not least in the form of other cats. A Tonkinese will assume that everyone is its friend, and for this reason should be kept indoors, where that assumption might be safer.

If deprived of attention, a Tonkinese cat will become bored very quickly – and may become lonely soon afterwards. They’re fond of play in a few different forms – they enjoy playing fetch with small toys, and will make use of scratching and climbing posts, should you provide them.

The Tonkinese is fond of exploring, and of climbing up into high places. Depending on the circumstances, you might want to discourage this behaviour while the cat is very young. If your home is filled with precariously-placed bone-china, then you might want to rearrange things before introducing a Tonkinese cat. Again, providing a Tonkinese cat with distraction will prevent them from seeking out their own.

Having only very short coats, a Tonkinese need only be brushed and bathed very occasionally, and they’re generally considered low-maintenance. This breed is a particularly vocal one – they’re always game for a chat, and will call you if they want you. Their call is a softer one than that of the Burmese, but it’s not only that should be ignored – lest the animal find a different way to get your attention!

One Response to Tonkinese