It’s not easy being a cat. Though human beings aren’t around to witness it, cats must navigate a number of hazards after they’ve left the catflap – and most of these hazards are posed by other cats. Indeed, our furry friends are at their most active when they’re hidden from us – and this is probably no accident. Let’s examine some of the things that cat get up to when we’re not looking.

Cats are descended from lone hunters, who prowled over vast open spaces. This evolutionary heritage is in sharp contrast to the situation that a cat now finds itself in, crammed into just a tiny space with hundreds, or even thousands of cats living in the space of just a few square miles.

One might suspect that this pressure might be too much to bear, and that many cats will instinctively resort to violence. But fighting with other cats is quite a costly business – not only is it painful, but it’s also hazardous to feline health. 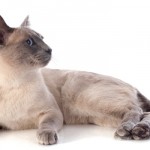 For this reason, cats are highly suspicious, or even fearful, of other cats, and will do everything in their power to avoid confrontation. One of the tactics employed is a sort of rota system, whereby one cat will venture out at certain times of the day, while the neighbouring one will stay indoors. This thereby limits the chance of them meeting out in the open, and reduces the risk of a violent altercation.

But how is such a system arrived at? Clearly, cats don’t meet one another and plan a schedule in advance. No; instead the cat relies on that most helpful of feline traits – their sense of smell.

Sight and sound are essential to our understanding of the world, and smell is largely only there in a supporting capacity to discourage us from ingesting something poisonous. In a cat, smell is far more important, and plays a key role in allowing it to navigate the world.

The nose of a cat is many times more powerful than that of a human. They have around twice the amount of scent receptors in their noses, allowing them to scent things that we humans would never be able to. Moreover, they’re able to detect very subtle variations in scent – and use those variations to signal their intentions to other cats.

The ability to detect these subtle variations allows your cat to understand that a cat has been in a given place. Not only that, but the cat can also sense exactly which cat, and how long ago. Cats will also use smell to indicate their territory to other cats, and thereby make it plain exactly who has been where.

This mechanism allows cats to avoid violence rather than seek it out. If a cat scents a territorial marking, they can either respect it and retreat, or they can defy it and leave their own marking. The first cat is then presented with the same choice. It’s only when both parties are unwilling to retreat that an impasse is reached – and even then the same back-and-forth sabre-rattling is repeated with yowls and hisses and teeth-baring and other forms of aggression before violence is finally resorted to.

Cats are also one of a handful of mammals to be blessed with a second organ that senses airborne chemicals – the so called vomeronasal organ, or Jacobson’s organ. This is an opening in the top of a cat’s mouth, just behind the front teeth, which leads to the nasal passage. When a cat wants to heighten its sense of smell, it can simply open its mouth slightly to allow airborne particles to flow upward. This act of opening the mouth is known as the ‘Flehman response’, and can be witnessed whenever a cat has caught an interesting scent.

If you’ve ever been watching your cat potter about in the garden and suddenly become enormously alert and aware of its surroundings, then you’re not alone. Well, the good news is that your cat probably isn’t freaking out for no good reason – the chances are that you’re watching the result of a suspicious scent. In much the same way that we might freak out if were to notice a strange package on our doorstep, cats are wont to do so over unfamiliar smells. Such a smell could mean anything – from the arrival of a new cat in town to some nearby prey, and your cat will need to be alert to distinguish between the two.

Cats also use their sense of smell in order to secure themselves sexual partner. Indeed, the feline dating game would be largely impossible without a sense of smell. Just as humans might indicate to potential mates that they’re on the proverbial market by investing in a new haircut and a fashionable pair of trousers, cats prefer to do so through scent. As well as being able to scent another cat who might potentially want to do them harm, a cat can also scent one who might wish to bear their children. 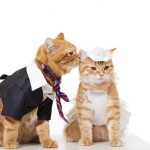 When a female cat enters heat, she will give off powerful pheromones. Males are able to detect these pheromones, even over vast distances. Again, this is another vestige from the cat’s evolutionary heritage in sprawling deserts and grassland, in which there might only have been a handful of males in a ten-mile radius. In the modern urban setting, things are a little different – but the strength of the scent is much the same.

The result of this is that toms will congregate outside the house of an unspayed female cat, yowling their entreaties like a chorus of furry Romeos. And the female cat will likely heed the call and head immediately outside, where the biggest and most intimidating cat will usually get to have his way. Naturally, if you’re looking to avoid having your garden play host to a party of this sort, then it’s wise to get your female cat neutered at the earliest opportunity!