The Maine Coon is a cat which is famous for its huge size and friendly nature – it’s a gentle giant which is beloved of cat-owners the world over. But how exactly did such an unusual breed ever come to be? In this article, we’ll take a look and see if we can find out. 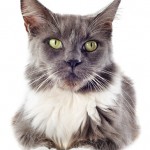 Profile: what is a Maine Coon?

Perhaps the best place to start with the Maine Coon is its famously voluminous proportions – we’re talking about a very big cat, here. In fact, some can grow so large that they tower over most dogs. Maine Coons come with a moderately-long fur coat, which creates the impression that they’re even larger than they actually are. These fur coats can be a variety of different colours, in a variety of different combinations – from tortoiseshell to tabby!

History: Where did the Maine Coon come from?

As with many pedigree breeds of cat, the clue is in the name: the Maine Coon’s roots lie in the American state of Maine. The specifics of the breed’s birth is not exactly known – and this gap in knowledge has led to all sorts of bizarre theories being concocted. One holds that Marie Antoinette tried to escape to the United States, and managed to load a Maine-bound ship with her collection of Turkish Angora cats before being summarily executed – and it’s from this feline cargo that the modern Maine Coon is descended. Another suggests that an Englishman called Charles Coon used to sail around with a ship full of long-haired kittens, which he would allow to mate with the local cats wherever he docked. A third holds that the Maine Coon is descended from the wild ancestors of bobcats – which would explain why the breed has those distinctive tufts above its ears.

Whatever the breed’s precise origins, it was not until the latter part of the 19th century that pedigree cat breeding began to grow more sophisticated. The state of Maine held a contest at Skowhegan Fair, in order to discover the “Maine State Champion Coon Cat”. The first formal cat show to take place in the US was held in Madison Square Garden in 1895. A handful of Maine Coons were entered here, one of which was Cosey, a tabby Maine Coon kitten who was awarded Best in Show. Everything, at this point, looked rosy for the breed.

But, like many other breeds of cat, a threat was on the horizon in the form of the long-haired breeds like the Persian and Angora from the East. The Maine Coon would, after World War One, begin to decline in popularity. This decline was so absolute that in the 1950s the breed was declared extinct! Breeders set up an organisation called the Central Maine Cat Club (CMCC) in the 50s, in an attempt to reverse this unfortunate trend. One of the key contributions of this group was the creation of the first written standards for the breed.

Over the decades that followed, the breed enjoyed a huge resurgence – to the point that it was named the official cat for the state of Maine! The Breed would eventually arrive in Britain in the 1980s, where it is the fourth most popular pedigree breed according to the Governing Council of the Cat Fancy, a body set up to keep track of pedigree breeds in the UK.

Personality: What is a Maine Coon like to own?

Maine Coons have acquired a reputation for somewhat dog-like. This is owing not only to their considerable size, but also to their temperament. They are intelligent and obedient, to the point that they can be taught to do a few of the tricks that dogs can do, like walking on leads and playing fetch.

A Maine Coon craves affection in much the same way that most dogs do – for this reason, they aren’t overly fond of being left on their own for long periods of time. If you spend a lot of time away from the house, you might want to pair your Maine Coon with another animal, to stop them getting lonely.

The Maine Coon has a reputation for heart trouble, owing to its propensity toward Hypertrophic Cardiomyopathy (HCM). This is a heart defect which is passed down from generation to generation. Those considering buying a Maine Coon might have heard horror stories involving sudden death.

For this reason it’s especially important that those considering a cat should check with the breeder before proceeding with the purchase: Have both of the parents been tested for the gene associated with HCM? If so, the breeder will be able to provide proof in the form of either a certificate or a test result.

One should also consider that Maine Coon will have appetites proportionate to their size – and so, if you’re considering buying one, make sure to account for this larger food bill in your budgeting!