The Lhasa Apso is one of the more unusual names on the pedigree dog scene – largely because so many have difficulty pronouncing it. The dog itself is small and hardy, with dark-brown eyes, floppy ears and a distinctively fluffy coat. It can trace its origin to the mountainous region of Tibet after which it was named; there it would spend time guarding the palaces and monasteries. Now, its job is a little bit less grandiose, but no less worthwhile: it’s a beloved family friend in households across the world.

Let’s take a closer look at this iconic creature, and see what problems owners might encounter. 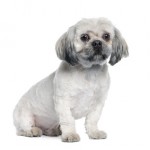 Profile: what is a Lhasa Apso?

The Lhasa Apso is a small sort of extremely hairy dog. Its coat is long and dense, and it’s this feature that distinguishes it from other breeds. Its name is thought to be after the Tibetan word for goat, which would make sense, when one considers its woolly visage. The Lhasa Apso is a playful, yet fierce breed – it’s very territorial and will bark at those it perceives to have overstepped the mark.

The Lhasa requires a little less exercise than other sorts of pedigree dogs, especially those bred for hunting. It can get by with less walking time than other breeds and won’t get stir-crazy if kept indoors for long periods of time on a rainy day. Consequently, it’s great for those living in confined conditions, such as in an apartment – though it won’t say no to a small outdoor area to play in.

History: Where did the Lhasa Apso come from?

The Lhasa Apso comes from a lineage that stretches back thousands of years; mountain wolves of Tibet were first domesticated as far back as 800BC. They share much of their genetic makeup with modern wolves and it’s to this that we can perhaps attribute their fiercely territorial nature. This makes them among the oldest domesticated breeds of dog in the world.

It’s to this freezing Himalayan environment that the breed owes its hardiness, and its famously thick, luxuriant coat. The breed was first brought to England in the early 20th century by a pair of servicemen returning from the Eastern colonies, and from there it spread across the western world.

Personality: What is a Lhasa Apso like to own?

The Lhasa is naturally disposed toward being a watchdog. It may, as a consequence, bark at strangers and generally be suspicious of them. These behaviours can be corrected through early positive reinforcement.

The Lhasa Apso is a very strong minded dog, with a fierce sense of independence. It will want to lead, rather than follow – and if you’re not careful, it will end up leading you. Consequently, a strong sense of discipline is called for if you’re to avoid problems. As with any sort of dog, it’s important to set the right tone during their formative years, since behavioural problems can be more difficult to correct once the dog is a little older.

Unlike other sorts of pedigree dog, the Lhasa will mature quite slowly. It may be awhile before a puppy finally becomes fully grown, so don’t be alarmed if things progress less quickly than you thought!

As with almost all pedigree breeds, Lhasa Apsos are prone to a number of different health conditions and prospective owners should be aware of them. These include Cherry Eye, a painful condition which causes the dog’s third eyelid swells to become a cherry-like mass in the corner of the eye; and Patellar Luxation, a problem affecting smaller dogs which causes the knee joint to slide in and out of place.

The best way of avoiding problems is the same as with any other pedigree breed – find a reputable breeder to begin with, and request that they show you proof of the good health of both parents. These should include checks against hereditary conditions like hip dysplasia, hyperthyroidism and others.

Another problems are less serious, and involve a little extra work on the part of the owner. The Lhasa’s thick fur coat is among its most attractive selling points – but it’s also something that requires a great deal of maintenance. In order to keep it clean and tidy, regular grooming sessions are called for. These can be undertaken either by you or by a professional groomer. Once a week is usually enough to keep matting at bay. It’s important to bear in mind that brushing should be done immediately after washing, as attempting to brush dry hair will result in further matting – and it will be a painful and stressful experience for the dog too.