The English Setter is a distinctive breed of dog that’s closely related to the Spaniel. It’s one of the oldest breeds of pedigree hunting dogs – and it’s among the more popular domestic breeds in the country. In this article, we’ll take a closer look at the English Setter – at where it came from, and what it’s like to own. 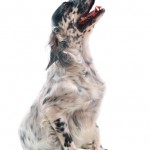 rofile: what is an English Setter?

An English setter is a variety of sports dog bred for hunting game and quail across moorland. It would operate by finding an airborne scent and following it to wherever its quarry was hiding, before ‘setting’ down on the ground in order to indicate the presence of the game to the hunter.

It’s a dog that strikes a happy balance between a range of qualities. It’s equipped for both high-intensity bursts of exertion and more long-distance tests of endurance. It’s neither especially small nor especially big, and has a medium-length fur coat with long flourishes at the back of the legs.

History: Where did the English Setter come from?

English setters can trace their ancestry back hundreds of years, to 16th century France, where French and Spanish pointer breeds were bred together to create an entirely new sort of dog. It would not be until later, however, that the English Setter as we know it today would come to be.

The Victorian Era was a time of rapid advance in the world of canine breeding. It was a time when many different breeds of dog were formally standardised, culminating in the latter portion of the 19th century with the first ever dog shows.

None of these changes had yet taken place when a breeder named Edward Laverek first brought the French and Spanish setters to England. He noted that changes in technology had made some of the setter’s traits less useful – the breed’s habit of ‘setting’, in order to indicate the presence of game was no longer useful to hunters with long-range weaponry. After all, if the hunter was standing a long distance away, he (and it usually was a he) would be unable to see whether the dog was sitting, standing or prone.

Laverack therefore decided to breed out this habit, and instead have the new breed crouch in a more upright position, so that they could be seen from further away. The new breed was consequently known colloquially as the Laverack setter. It would enjoy great popularity, not only among hunters, but among domestic households, too.

Personality: What is an English Setter like to own?

English setters are very warm, friendly and sociable dogs, who are bred to work in close conjunction with people thanks to their breeding in hunting. They are strong-willed and independent and so require a strong sense of discipline if problem behaviours are to be avoided.

They’re also very vocal, and will bark at those approaching the home. For this reason, they make excellent guard dogs – but this can be a problem, if it isn’t addressed early on. English setters benefit from early exposure to people, lights and other dogs, and from short, interesting training sessions rich in positive re-enforcement and reward.

Like all sports dogs, English Setters require long periods of physical exercise. This is a good opportunity for the owner to assert themselves over their pet; insist that the dog heel beside you when you’re walking it, and you’ll avoid behavioural problems associated with dominance – believe it or not, allowing a Setter to walk ahead of you can cause it to believe it is in charge!

Other problems can also arise from the dog’s hunting background. They have a strong sense of smell, and will follow any scent that arouses their curiosity. This can lead them to trying to escape, and to becoming lost. It’s therefore important to have a fence installed around your garden – and a substantial one at that, since English Setters are remarkably good at jumping over obstacles and tunnelling beneath them.

English setters can potentially become nuisance barkers, and are notoriously difficult to housebreak. The solution to both of these problems is a strong regimen of discipline from very early on.

One of the most important tasks for owners of English Setters is to keep its distinctive, luxuriant fur coat in good condition. This can be done through regular combing a brushing. You can either do this yourself or hire a professional to do it for you. Unlike longer-haired dog breeds, the English setter can get away with being bathed only infrequently.

Like many pedigree breeds, the English Setter is predisposed toward a few unpleasant health problems. The most notable of these is hip dysplasia – a problem whereby the thigh-bone does not quite sit properly into the socket of the hip-bone. This can be a painful and debilitating condition, and so it’s important to screen for it. Reputable breeders will be able to provide you with proof of the good health of both the mother and father of any puppy, and so this should be insisted upon before proceeding with any purchase. This will ensure that your dog will be happy and health for as long as possible!