If you’re familiar with the unbelievably popular comic strip, Peanuts, you’ll know that Snoopy, its main canine protagonist, is a Beagle. In the comic, Snoopy was a good-natured dog with an overactive imagination that made him loved by millions of children – and adults, too.

But does the real Beagle bare any similarity to its animated counterpart? Let’s take a look and see if we can find out.

Profile: what is a Beagle?

A Beagle is a sort of scent hound, which p 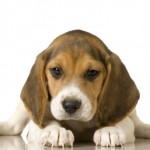 ursues its quarry (usually rabbits and other game) over great distances using its keen sense of smell. For this reason, it was bred to be powerful, with short legs that can run for extremely long distances.

While most modern domestic beagles don’t spend much of theirs time hunting, you can see a lot of this heritage in them. They perceive the world chiefly through their noses, and are always looking for interesting smells. Like all hounds, Beagles require a strong sense of discipline and a great deal of patience when it comes to training.

The Beagle, like Snoopy, is good-natured and playful – its temperament is even and its mind is sharp. This, combined with their modest size, makes Beagles hugely popular as a domestic pet.

History: Where did the Beagle come from?

The Beagle is by no means a recent invention – similarly proportioned dogs have been bred for thousands of years. Fortunately, we know a great deal about this, as the Ancient Greeks (unlike many of their contemporaries) had a wonderful habit of writing absolutely everything down. Xenophon, a philosopher in Ancient Greece, wrote an extremely detailed treatise all about hunting with dogs – he talks about breeding, discipline and techniques to be used on the hunt itself. Some of the dogs he describes sound remarkably like the modern beagle – it’s a hound that hunts hares by scent. Those interested in Xenophon’s point can view the Cynegeticus for free online, courtesy of the University of Adelaide.

A few centuries later, William the Conqueror would bring scent hounds to Britain in the form of the Talbot Hound, a strain which is thought to have begat the Southern Hound and then the modern Beagle. But the term ‘Beagle’ was synonymous with the smaller sort of scent hound throughout the Middle Ages – in spite of a number of differences between these dogs and the sort we’d recognise today as the beagle.

It wasn’t until the Victorian era that breeding dogs and cats became a true art form. It was this period that gave rise to the Beagle we know and love today. By the end of the century there were dozens of different beagle packs in England, and the breed had been standardised by two organisations working in tandem: The Beagle Club and then later by the Association of Masters of Harriers and Beagles. The modern Beagle owes a great deal to their work!

Beagles are highly intelligent, sweet-natured dogs. This intelligence can be a source of stress for the owner, however, as Beagles have acquired a reputation for mischief. Often, owners find themselves having to constantly outthink their dogs in order to cajole it into performing tricks, going for walks and getting them to behave themselves.

Generally speaking, the earlier a Beagle is exposed to different people, experiences and other dogs, the better it will be for its overall temperament. If you’re giving a home to an adult Beagle, you’ll have less room for maneuverer, and will likely have to put up with whatever personality you’re given – however troublesome it might be.

Beagles make ideal pets for those looking for a friendly companion. They’re warm and affectionate, and strongly empathetic. Given patient training and discipline, they can make wonderful additions to any household.

Scent hounds like the Beagle are easily distracted – they’re naturally inclined toward wandering around and exploring and so special measures should be put into place to stop them from making a break for freedom. A garden with a fence all around it is strongly recommended, and walking with a lead on at all times is highly recommended. A microchip and an appropriate ID tagged collar are both especially useful in the case of a Beagle, since they are far more prone to getting lost.

Adolescent Beagles, like most adolescent dogs, are full of energy and will demand frequent exercise. This energy will tend to drain away, however, as the dog reaches maturity – adult Beagles will need to be cajoled into going for walks if they’re to avoid becoming obese and it’s your job as owner to do the cajoling!