One of the more glamorous pedigree breeds of dog in the world is the Afghan hound. It’s easy to spot, thanks to its incredibly long, silky fur coat, its curly tail and its black face.

The Afghan Hound is an unusual choice of dog in modern Britain, with most households favouring Labradors and Alsatians. The breed is therefore perfect for those looking for something a little unusual. In this article, we’ll take a look at the Afghan Hound in greater detail.

Profile: what is an Afghan Hound? 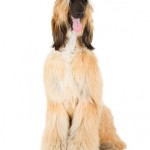 . Unlike scent hounds, sighthounds hunt primarily by keeping their prey in sight and outpacing them over a short distance, rather than chasing them for miles and miles. For this reason, the sighthound must be bred for short bursts of exertion; they are wiry and agile, with long pointed noses and enormous hind legs.

The Afghan hound is distinguishable from other sighthounds thanks to its famously luxuriant fur coat, which covers the entire body, and its long, floppy ears. Most – though not all – specimens have a black facial mask and some even have tufts of fur, called ‘mandarins’, growing from their faces, reminiscent of Fu Manchu’s moustache.

History: Where did the Afghan Hound come from?

It will surprise no-one to learn that the Afghan Hound’s ancestry can be traced back to the mountains of Afghanistan. The local dogs there had to grow long, thick coats in order to cope with the harsh conditions of the winters there. There were many different sorts of hound present there, and it wasn’t until later that these breeds were blended together and the standard for what constitutes an Afghan hound was formally defined.

The breed was first brought to Europe in the early portion of the 20th century, with early descendants of the modern Afghan Hound arriving in Britain shortly after the turn of the century. These early examples were used both for hunting and as guard dogs.

Thanks to its highly distinctive appearance, the Afghan Hound earned special popularity at the earliest British dog shows. At the time, there were many different sorts of sighthound being brought back from India and the surrounding area. One particular specimen, Zardin, was brought back from India in 1907 and would become among the earliest recorded examples of the breed – which at the time was still commonly called the Persian Greyhound. The breed was standardised for the first time shortly afterwards, but the outbreak of the First World War put a halt to any further breeding activity.

Personality: What is an Afghan Hound like to own?

Afghan Hounds make excellent companions thanks to their warm and affectionate temperament. While some report that they are slightly aloof, the Afghan Hound socialises well with other dogs. They are not quick to trust strangers, but they are never hostile toward them. The breed’s heritage as a hunting dog makes it easily disciplined – but it requires strict guidance and consistent rules if it is to thrive. Afghan Hounds crave strong leadership on the part of their owners and will begin to grow miserable if deprived of it.

The Afghan Hound is built for short periods of high-intensity exercise. They are bursting with energy, and if they aren’t given an outlet for this energy, they will tend to go a little stir-crazy. For this reason, it’s important that you take them out for regular walks – and even runs.  If you give them the opportunity, they will quickly exhaust themselves – making them ideal pets for joggers and those looking to play fetch and Frisbee!

As you might expect from a breed with such a long coat, grooming is a hugely important commitment for owners of the Afghan Hound. Regular baths are a necessity, as are brushing sessions – and both must be performed at the same time, since brushing a dry fur coat can cause damage, making it more easily matted.

As a general rule, weekly grooming sessions are enough to keep the danger of matting in check – and this will help to save time in the long run. It’s not much fun (for owner or dog) to spend a great deal of time trying to brush matted fur. By the same token, the Afghan Hound’s long ears are at risk when it comes to eating and drinking – for this reason, many owners give their dogs specially-designed snoods, which help to keep the ears from falling into their bowl.