If you were to picture in your mind the fluffiest dog you could imagine, then the chances are that you’re thinking of the Samoyed. They’ve been a mainstay at dog shows for what seems like forever – and their distinctive coat of thick white fur has drawn plaudits from dog-lovers the 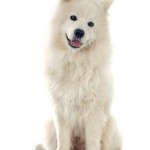 world over. But what exactly is a Samoyed, and where did this distinctive, lovable breed come from?

In this article, we’ll plumb the depths of these mysteries, and try to shed some light on exactly what the Samoyed is – and see whether you’d want one in your household. Let’s begin, shall we?

Profile: What is a Samoyed?

The Samoyed is a breed of dog which is covered in a thick coat of brilliant-white fur. They have dark, almond-shaped eyes, and triangular ears covered in fur. This fur comes in two layers. There’s the top layer, which is silky smooth, long and luxuriant, and there’s the under-layer, which is comprised of thick, woolly fur. It’s this latter layer than actually does most of the insulation; the former simply serves to keep snow, rain and debris out.

But the Samoyed’s most distinctive feature is perhaps its tail. It’s hugely curly, and rests atop the animal’s back. When the weather gets a little chillier, the Samoyed will sometimes rest its tail on top of its nose in order to keep themselves warm.

History: Where did the Samoyed come from?

The name Samoyed is derived from the Samoyedic people, who bred them to help with reindeer herding. When one considers just how cold a Siberian winter can get, it’s small wonder that the dog adapted such a thick and warm coat – without it, it’s unlikely the dog would have been much use when it came to herding!

Since the dog was bred in such a remote setting, we don’t know an enormous amount about how it came to be. That said, we do know that it’s been around since before the 19th century, when many modern breeds first came to be, thanks to recent genetic data.

One particular grisly Samoyed episode came courtesy of Fridtjof Nansen, a Nobel-prize winning explorer and native of Norway. Nansen achieved his fame thanks to his exploration of Greenland and the North Pole. When exploring the latter, Nansen favoured Samoyed-driven sleighs – but he had to contend with a logistical problem – dogs require food, and food, to his knowledge, was rather scarce in the ice (he had no knowledge of seals, polar bears and killer whales, much less the expertise to hunt them). He therefore came up with an ingenious plan; he would regularly kill one of his dogs and feed it to the others. A grisly solution, to be sure – but one which saw him achieve worldwide renown.

Thankfully, today the Samoyed is treated rather more charitably!

The breed can grow restless if it’s not given enough stimulation. To avoid this, Samoyed owners should consider long walks and games obligatory. A Samoyed will enjoy this especially during the winter, when its long fur coat will allow it to thrive even during the coldest of cold spells.

As you might expect from a dog raised to do hard work in the Siberian wilderness, Samoyeds have a strong sense of companionship with their masters. After all, a dog who wandered off and did its own thing, or that could not effectively obey commands, would be of no use, and would therefore be quickly removed from the gene pool.

Samoyeds therefore thrive in co-operation with humans. You’ll need to pay it attention, and be prepared to offer it a strict sense of authority and discipline. If you don’t then problem behaviours are likely to manifest themselves. Specifically, you might see the dog become destructive and stubborn, and it might begin to bark excessively.

The Samoyed is especially good-natured, and will play very well with children. It’s therefore hugely popular with those just starting a family. If you’re to avoid, or at least minimise, the negative aspects of ownership, then you should be sure to get your dog from the right breeder. If you’re getting an adult dog from a shelter, then you should be sure to get one that hasn’t developed any of these negative traits – eliminating them once they’ve become embedded may prove a difficult task!

The Samoyed is distinct from other breeds thanks to its hugely luxuriant, thick white coat. This is selling point for the breed, as it’s incredibly beautiful. But it’s also a point against it, as the fur requires a huge amount of effort to keep it in good condition. You’ll need to be perform a rigorous grooming session regularly if you’re to stay on top of things; and this might include the occasional bath.

Another problem associated with the Samoyed’s fur coat is its propensity to leave enormous amounts of fur in its wake. Wherever the dog enjoys sitting will surely become festooned with long strands of hair – and so you’ll need to be prepared to break out the vacuum cleaner every so often in order to get a handle on the situation.

The undercoat is shed twice a year, and will fall away in in heavy clumps. The top layer, on the other hand, is shed all year round – and so you’ll need to be prepared to work if you’re to get along well with a Samoyed!

The Samoyed, like many other breeds of dog, is especially susceptible to certain sorts of diseases. These include dysplasia of both the hip and elbow, hyperthyroidism and diabetes, as well as a breed-specific disorder known as Samoyed Hereditary Ghlomerulopathy.

The latter of these is a disease which affects the kidneys. It’s more severe in males, who usually die from renal failure at around a year old, but females can get the diseases in a milder form, too. Unfortunately, there exists no way to screen against the disease, and so those looking to buy a Samoyed will have to resign themselves to the risk they’re taking.