If you’re looking for a breed of cat that’s full of character and mystery, then the Norwegian Forest Cat fits the bill ad 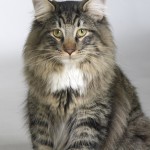 mirably. They’re close in appearance to the wild forest cats to which they’re closely related. It’s easy to imagine them stalking through the snowbound trees in search of prey!

They’re thought to have been family pets in Norway for more than a thousand years, providing the Vikings with company and companionship – as well as making themselves useful with their considerable hunting and fishing abilities.

In this article, we’ll examine this breed more closely, and see if we can shine some further light on this legend of Scandinavia.

Profile: What is a Norwegian Forest Cat?

The first thing you’ll notice when presented with a Norwegian Forest Cat is that, like its close relative, the Maine Coon: it’s rather big. Bigger, in fact, than most dogs. As you might imagine from a breed named after the freezing forests of Norway, this is a cat which is adapted to cope with a very cold climate. It’s covered in a thick coat of long, glossy hairs – which make it very pretty to look at. Not only that, but beneath this top layer lies another coat of densely-packed short hair, which provides a fuller insulation against the chill. This coat is at its longest around the sides of the head, on the belly and the legs.

By the time the cat reaches maturity, you can expect it to be very heavy indeed. By the standards of the domestic cat, the breed is highly sexually dimorphic. At the extremes, a fully-grown female might weight nine pounds, a male can weigh almost double that, at sixteen.

History: Where did the Norwegian Forest Cat come from?

You might guess from the cat’s name that it first originated in Norway. But where it came from before that is largely a mystery. Some theories hold that the cat was spread through Viking expansionism; the cats were brought back by raiding parties venturing westward to Britain. Or the cat might have ultimately come from the Middle East, and been brought back by crusading knights. The first of these theories is lent further credence by this breed’s skill as a mouser – they’d have made very seaworthy cats, protecting food supplies from the attention of vermin.

This breed is one which owes a great deal to natural selection. While many of the features of pedigree cats were bred in according to the desires of their breeders, the Norwegian Forest Cat is built extremely practically. That powerful frame and thick fur coat make it great for coping with the harsh climate of a Norwegian Forest – for stalking through the forest and overwhelming its quarry over a short distance!

Since it was first domesticated, the breed has enjoyed niche popularity in its homeland right up until the start of the Second World War, which severely endangered the breed’s long-term prospects. The Norwegian Forest Cat club managed to prevent this catastrophe, however, by putting into place a long-term breeding programme. From then, the breed spread across the world, being recognised by Cat Fancying organisations in both Europe and America. Today, the Norwegian Forest cat remains extremely popular in Scandinavia.

Personality: What is the Norwegian Forest Cat like to own?

Norwegian Forest Cats are generally quite shy and retiring – unlike many other breeds, they’re not likely to fill a household with deafening mewling. That said, when in the company of other animals, like dogs, they can become a little more vocal.

Owners of these cats report that they’re extremely energetic. They’ll exert themselves in short bursts, and then indulge in long cat-naps through the afternoon. They’re happy out in the open – even if you don’t happen to live near a Norwegian Forest. If given the chance to roam around outdoors, they will quickly demonstrate their considerable skill at hunting. This prowess is likely to bring a succession of dead rodents into your kitchen floor.

Naturally however, the Norwegian Forest Cat is a highly valuable animal, and so many owners are reluctant to allow theirs outside. This concern is particularly pressing in an urban setting. Provided that an indoor cat is provided with interesting toys to play with, a view of the outside, and the occasional spell of one-on-one attention, the cat can grow to be happy and well-adjusted.

Like many pedigree breeds of cat, Norwegian Forest Cats are a slightly more vulnerable to suffering from certain health conditions. Of these, two in particular stand out: type IV Glycogen Storage Disease (GSD), and hip dysplasia.

Glycogen Storage Disease type IV (or Anderson Disease) is a condition which renders the animal unable to properly synthesise glycogen (the molecule through which animals are able to store energy for later use.) This leads to the creation of abnormal glycogen molecules in cells, which can cause death while the cat is very young.

Obviously this unpleasant consequence is to be avoided where possible. For this reason, a reputable cat breeder will carry out a DNA test in order to ensure that their animals are not carriers of the disease before allowing them to breed. If you’re looking to buy a Norwegian Forest Cat, then you should certainly make a point of seeing proof that this screening has taken place.

Hip dysplasia is a partially hereditary disease whereby the bones which form the hip socket don’t quit sit right together. This can eventually lead to total lameness and painful arthritis.

While the condition is at least partially caused by hereditary factors, environmental ones can also play their part. While we can’t control for the former – at least not after we’ve parted with the money for the cat – the latter we can influence. Perhaps the single greatest contributing factor to hip dysplasia is obesity. After all, the fatter a cat is, the more weight its hips are forced to carry. The likelihood of hip dysplasia can therefore be reduced through a proper diet and exercise regime.