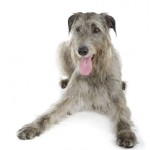 wolfhound is an exceptional breed, notable for being among the largest on the planet. In this article, we’ll take a close look at this creature, and where it might fit into the modern household.

Profile: What is an Irish wolfhound?

As we’ve already touched upon, the first thing you’ll notice about the Irish wolfhound is that it’s exceptionally large. While it might not be as massive as something like a Great Dane or a Mastiff, when this animal springs upon its hind legs, it can be as tall as a small horse.

The wolfhound has a long, narrow skull with a slightly pointed muzzle and small ears which give an indication of the dog’s mood. When the dog is excited, they’ll prick up; when the dog is relaxed, they’ll flop back down again.

The breed has a long, arched neck, a deep chest and a tail that hangs at a slight curve between wiry, though strong, legs. Across its body is a rough coat of wiry fur, which is coarse and not as pleasant to the touch as that of, say, a retriever or a Samoyed. This fur coat comes in a variety of different colours, ranging from greys to reds to blacks – though, of these, greys are by far the most common.

History: Where did the Irish wolfhound come from?

The Irish wolfhound is an extremely old breed of dog. It’s thought to have been first introduced to Ireland thousands of years ago. Unfortunately, the Celtic peoples of Ireland were notoriously dreadful at writing things down, preferring instead to pass on their wisdom through the spoken word. We must therefore rely on other civilisations, who encountered Celts on the battlefield, to give us information on their early history.

There is plenty of evidence to say that dogs of this size existed at the time – when the ancient Greek town of Delphi was sacked by Celts in 273BC, survivors recorded accounts of their attackers being accompanied by enormous dogs. Julius Caesar himself also noted the presence of such dogs in his account of Rome’s campaign in Gaul.

Whatever the breed’s origins, it eventually declined in Ireland thanks to extinctions in the local boar populations. It wasn’t until the intervention of British officer named George Graham that the wolfhound’s fortunes were reversed. He introduced Great Dane and Deerhound, and thereby revived the species toward the end of the 19th Century. By the start of the First World War, the breed was a symbol of national pride in Ireland, and featured prominently in the propaganda of the time.

One might imagine that a dog as large as this might be difficult to handle – but that’s far from the case. Their temperament is excellent; they’re loyal to their owners, eager to please, and they’re great with children. For this reason, many families have them as pets.

The wolfhound will happily greet perfect strangers as though they are the best of friends, and for this reason they don’t make the greatest guard dogs – though their sheer size might be enough to deter all but the most daring of intruders.

Ownership of an Irish wolfhound requires a strong sense of discipline, and a commitment to daily exercise. This is especially so during its formative years – though walks should be undertaken more sparingly at this time, so as to give the dog’s body some time to rest and recuperate. During this early stage, owners should make sure that the dog is well behaved and does not pull on the lead. If you don’t correct this behaviour early on, then it will become hugely problematic when the dog becomes fully grown. At that point, it might no longer be the dog being taken for a walk – it might be you!

Fortunately, the breed responds well to gentle, consistent authority. You don’t need to be brutal with your directives, just make sure they make sense. Don’t feed your dog contradictory messages, and don’t punish good behaviour by shouting. Bear in mind also that Irish Wolfhounds have a tendency to be clumsy, and so they’re probably best not introduced to environments where there are delicate objects around.

Being such an enormous animal, the Irish wolfhound demands an enormous quantity of food in order to sustain its considerable engine. This is especially so during adolescence, as the breed has a tendency to grow rapidly after a spell of relative stagnation. This period is crucial for their long-term development, and so investing in high-quality food during this time is essential.

As is the case with many other pedigree breeds of dog, there are some pathologies to which the Irish wolfhound is more susceptible. The breed, like many giant breeds, has a very short lifespan; most will live only until the age of about seven before succumbing to disease.

Of these, one of the more common killers is bone cancer. Some studies have indicated that neutering may be linked with a higher prevalence of this disease – and yet the risks of not neutering are still fairly considerable. Ultimately, one should make the decision only after careful consideration, and consultation with one’s vet.

Like many large dogs, the Irish wolfhound is also prone to suffering hip dysplasia. This is where the hip joint comes loose, resulting in pain for the animal and eventual lameness. Another related disease, disproportionately suffered by larger dogs, is osteoarthritis. This involves a more general degradation of joint cartilage across the body; over the years, the weight of the dog grinds this lubricating material away, causing the bones to rub painfully against one another.

Perhaps the best way to limit the threat of hip dysplasia and osteoarthritis (along with a host of other diseases) is to properly control your dog’s weight. This is because obesity is a strong predictor of both conditions, thanks to the extra weight that it forces your dog’s joints to bear. With the right foods and regular exercise, however, these problems can be guarded against – and your Irish wolfhound can enjoy a long and happy life.