When it comes to glamour, there are few breeds of dog that can match the Irish Setter. Also known as the red setter, it’s ever-present at dog shows, thanks in the main to its lustrous, shining coat of red fur. Let’s take a closer look at this breed, at how it came to be, and at whether you’d want to invite one into your home.

The Irish setter is a variety of gundog with a distinctively red or chestnut fur coat. This fur is incredibly lush and silky, and is one of the major selling points of the breed. They s 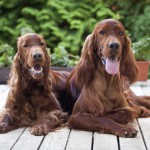 tand at around two feet tall at the shoulder, and so represent a perfect middle ground between a large, cumbersome dog and a tiny one. Like many gundogs, this particular breed has a deep chest and a small waist, giving it a distinctly front-heavy appearance.

Putting looks to one side, the Irish setter is brimming with energy and loves to be given attention. It’s therefore a perfect companion for people who lead active lifestyles, who are looking for a dog that’s fun to be around and will entertain them.

History: Where did the Irish setter come from?

To the surprise of precisely no-one, the Irish setter originated in Ireland. They were bred to be gun dogs, which in practice meant that their role was to seek out game and indicate its presence to their master by ‘setting’, or sitting down. Their bodies and talents have been shaped by selective breeding to perform this role; they have the stamina to run across both wet and dry terrain, and the sense of smell required to track a bird over a vast distance.

The breed, however, did not always look as it does today – the solid red colouring came about later, as a result of selective breeding. Earlier forms of the Irish setter were covered with white patches, much like the modern springer spaniel – and some modern examples of the breed still display some white patches.

We can find references to these early descendants of the Irish setter in literature from the sixteenth century. But it wasn’t until the early 18th century, when printing and writing had achieved ubiquity, that the term ‘setter’ is more widely documented. During this period, a number of Irish aristocrats had begun to keep detailed records of their dog breeding programs. By the end of the 19th century, a standard for the breed had been drawn up, with a hundred-point scoring system to grade each animal’s physical attributes. This system was later dropped – though the general standards it aspires toward remain to this day.

In modern times, the setter is not used as often for hunting as it is for general companionship and company for those looking to go on long walks and runs.

The Irish Setter, like all breeds of hunting dog, is bursting with energy that needs to be regularly vented. They should therefore be provided with toys, and a sizeable garden in which to run around. If you don’t have access to a garden, or, worse still, you’re living in an inner-city apartment, then the breed is likely unsuited to your circumstances.

If, on the other hand, you live out in the country, and spend a lot of time outdoors, then the setter will suit your lifestyle swimmingly. They’re great companions for long hikes and jogging sessions, and will easily keep pace with you. Moreover, they’re intelligent enough to be trained, and so will resist barking at every other dog you might encounter.

Being a hunting dog, Irish setters crave the attention and approval of their master. If they’re left alone for long periods of time, they may become restless. For much the same reason, they’re unsuited to being left outside overnight, and may howl with disapproval if forced to do so.

Training an Irish setter requires a certain sort of personality. They’re strong-willed, and have a keen sense of who is and isn’t in charge. Some potential sources of misbehavior stem from dominance hierarchies – if they sense that you aren’t the proverbial leader of the pack, then they might try to challenge your authority.

They therefore require a firm, commanding tone of voice if they’re to be subdued. For this reason, many more passive dog-owners have reported that the breed is reckless, and not responsive to discipline.

When it comes to discipline, consistency is key. Set the animal clear boundaries, and don’t bend the rules unless absolutely necessary. For example, jumping up and onto humans is to be strongly discouraged – and failure to do so will likely lead the behavior persisting. Another potential problem behavior stems from unwanted digging – hunting dogs in general have a sharp sense of smell, and will resort to digging up any patch of earth that excites their curiosity. Preventing this behavior is, again, a matter of projecting an air of consistent authority.

Naturally, it’s easier to instill virtues in a young dog than it is to remove vices from an old one. You’ll therefore want to begin firm training at the earliest opportunity. If you’re unsure that you’re able to project the required air of authority, and want to avoid behavioral issues later on in the dog’s life, then it’s perhaps best to select the most submissive puppy of the litter you’re presented with, since brothers and sisters can vary tremendously in their dominance-related behavior.

Owners of Irish Setters will also have to contend with their magnificent fur coat. It will require regular grooming sessions if it’s to look its best – and in most cases, this is best performed by a professional. If you’d prefer to do it yourself, then you should prepare yourself for a learning curve, as there’s more to grooming than might first meet the eye. Once you’ve mastered the art, however, you’ll be able to cut the cost of ownership, and you’ll have a magnificent-looking animal when you’re done, too.