Cats, like any other animal, are capable of consuming more energy through their diet than they expend through exercise. And those that do will, thanks to the physical laws of the universe, need to store that energy somewhere. Or, to put it another way, cats that eat a lot and don’t move very much will become fat. 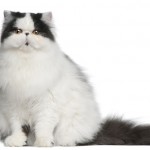 Fat cats have become a mainstay of popular culture. To take one example, Garfield is a cartoon cat who delights millions by being extraordinarily lazy and fat. But the reality has little in common with the fiction – feline obesity is a considerable problem. In this article, we’ll take a look at just why this is the case, and see how it might be addressed.

What’s so Bad About Obesity?

Obesity has been linked to a number of adverse health effects. Each of these will cause an afflicted cat to suffer, and may shorten its life. In some cases, this shortening is drastic and acute!

Insulin resistance is one such associated condition. It involves a cat’s ability to regulate its own hunger and metabolism. Insulin, the hormone that controls the level of sugar in the blood, is not properly ‘seen’ by the parts of body concerned with releasing sugar into the bloodstream. Consequently, dangerous imbalances in blood sugar levels occur. This in turn will increase the likelihood that the affected can will develop diabetes.

Other conditions linked with obesity are high blood-pressure and heart disease. When fatty deposits accumulate on the inside of a cat’s arteries, they squeeze the area through which the blood must flow. This creates resistance, which in turn increases pressure. This pressure over time causes the circulatory system to wear out and ultimately fail.

Osteoarthritis is another disease whose symptoms are notably exacerbated by obesity. The joints of a cat are adapted to tolerate only a given weight before giving out. If they have to bear more weight, then they’ll wear out that much more quickly – and the result will be a spiral effect, where moving causes the cat considerable pain, and exercise is therefore avoided in order to prevent this pain from being suffered – which, of course, only causes the cat to gain more weight.

While these are among the more well-documented diseases linked with obesity, it’s by no means an exhaustive catalogue. Obese cats are also more likely than their skinnier cousins to develop disorders of the kidneys and liver – they’re also more likely to contract cancer, too.

Before we can postulate ways in which we might limit the impact of obesity, we should consider what might cause it. Fortunately, this is one area where the causes of the problem are quite clear – as we’ve touched upon, obese cats are those that consume more calories than they expend.

But where exactly do these calories come from?

Naturally, the majority of a cat’s calories will be taken on board during mealtime. But there’s a problem here; many owners do not insist upon strictly regimented mealtimes, and will instead elect to leave food out constantly, allowing the animal to eat whenever it’s hungry. While this is undoubtedly a hugely practical method of feeding a cat, it’s also one that will surely cause obesity – particularly among cats with insulin regulation problems.

Constant access to food is something which will cause a cat to constantly indulge their appetite – and that’s a sure-fire recipe for weight-gain.

As well as the quantity of foods we serve our cats, we must also consider the quality. Many commercial pet-food manufacturers provide foods that our cats find palatable – because owners of cats that will happily eat a given brand will likely return to that brand, if only for a stress free life. But the nutrients that we find palatable aren’t always best for us, and the same holds true with cats. Foods which are heavy in fats and carbohydrates, while simultaneously light on proteins and fibre, are likely to promote weight-gain.

Energy-rich treats are also a potent source of calories. Many owners elect to indulge their pets, to make them happy in the short term. Naturally, these treats will tip the scales toward a fatter cat – no matter how stringently mealtimes are vetted.

Finally, it’s worth mentioning that some cats are simply genetically predisposed toward obesity. If your cat is such an animal, then a tightly-regimented diet becomes all the more useful – by carefully rationing which foodstuffs your cat can eat and in what quantities, you’ll be able to hugely mitigate the impact of the predisposition. Many leading manufacturers such as Royal Canin and Hills now offer specially prepared food ranges to combat problems as well as meeting the needs of many special dietary requirements for our pets and Feline Obesity is one of these.

Unlike humans, cats are unable to exert self-control over their caloric intake – after all, it’s impossible to explain to them that eating too much and not moving enough might cause weight-gain. They therefore need the help of their owners in order to keep their bellies in check. The two solutions are obvious – diet and exercise. It’s how these are to be implemented that poses the challenge.

Unlike dogs, cats are quite capable of exercising themselves. May will happily go out into the garden and play, if they have the opportunity to do so.

Not all cats are afforded this opportunity, however. If your cat is of the indoor variety, then they’ll have far less of an opportunity to get out and about and play. Similarly, if the weather outside is on the frightful side, your beloved cat will be less inclined to go outside and frolic in it.

If your cat is stuck indoors all day, then they’ll need something to expend their energy on. A play toy can work wonders, here – just be sure to invest in one that’s explicitly designed for cats. With the help of a little technology, even a housebound cat can become healthier – and happier, too!