If the medical profession is to be believed, many of us will benefit from getting up and about a lot more. In that endeavour, there can be few more enthusiastic collaborators than a dog. Those short daily walks all add up over the long term, and the end result is health and fitness. And if you’ve got a dog that’s full of energy by your side, then these excursions will be a great deal more fun than they otherwise might be.

Of course, some breeds of dog have more energy to spare than others. Of these, it’s the hunting dogs that are the most willing volunteers for ‘walkies’. They’ve been bred to get out and about, and thrive under the right owner. Among hunting dogs, the English Cocker Spaniel is among the most popular – its distinctive floppy ears make it a favourite, both at your local park, and at the most prestigious dog shows. It’s the most successful breed in the history of Crufts, with a total of seven ‘best in show’ wins.

In this article, we’ll take a closer look at this breed, and see how it might slot into your home life.

Profile: What is an English Cocker Spaniel?

The English Cocker Spaniel is a small bundle of energy. Its body is built with movement in mind, and for that reason it’s well-balanced, with muscles in all 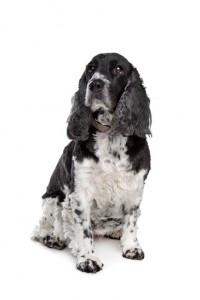 the right places to produce sudden bursts of movement. Like all hunting dogs, Cocker Spaniels are exceptionally intelligent, and this intelligence will be apparent every time you look into its eyes.

English Cocker Spaniels are covered in long, silky fur. You’ll get longer, wavier hair around the bottom of the body, with the lower legs and abdomen being heavily ‘feathered’. This isn’t just a decorative touch, however – it offers the breed protection against the elements.

The breed is recognisable thanks to its trademark, floppy ears, which flop down at the side of the head. This feature helps set the breed apart from its close cousin, the larger English Springer Spaniel, whose ears are slightly shorter, and whose muzzles are typically longer.

History: Where did the English Cocker Spaniel come from?

As you might imagine, hunting dogs like the spaniel have been around for quite a while, and so tracing their precise origins is tricky. We know that spaniels have existed in one form or another for at least five-hundred years, because the term appears in the works of both Chaucer and Shakespeare.

That said, the main breeds of spaniel we recognised today did not come to be until the middle of the nineteenth century. Up until that period, spaniels came in two forms: there were land spaniels, and there were water spaniels. The former were used for tracking game, while the latter were used for retrieving water-fowl from the water after the hunter had shot it down with a bow-and-arrow.

As technology changed the face of hunting, the role of the dog had to change, too. Thanks to the introduction of firearms, there was no longer any need to get close to the game. Dogs needed to instead be trained to work in conjunction with the guns, either to ‘point’ the game out to the hunter silently, or to drive the game toward the guns so that the hunter could easily shoot it. The Spaniel was one of the latter sort – and that’s why modern cocker spaniels are so eager to give chase to anything that moves, and so ready to bark as they do!

Personality: What’s an English Cocker Spaniel like to own?

Regular walks should be considered obligatory. If the dog isn’t given an outlet for all that energy, it will usually become destructive. Unless you want your upholstery to become shredded, you’ll need to find time to take the dog for a walk. If you can’t, then you should consider a more docile breed.

It’s worth noting that the English Cocker Spaniels requires frequent grooming. Its long fur coat will drag along the floor, particularly if it’s allowed to follow its nose into the undergrowth during long forest walks. Owners should be sure to brush the dog’s hair regularly, and occasionally enlist the aid of a professional groomer for a more thorough clean.

The breed’s distinctive floppy ears, as well as being a unique selling point, are also a source of potential problems. Harmful microbes require warmth and moisture in order to thrive, and floppy ears provide both in abundance. This makes the cocker spaniel especially vulnerable to ear infections, and so care should be taken that the breed is shielded from potential sources of infection, and that their ears are cleaned out and dried. This danger is particularly acute if the dog has been for a swim – be sure that it’s fully dried out!

In order to get the best out of the breed, you’ll need to be able to project authority – but you’ll need to do so without resorting to outright nastiness. Cocker spaniels, despite their boisterous nature, have very soft personalities. They respond well to gentle, consistent instruction and training methods. You’ll need to be sure that bad habits aren’t allowed to develop by establishing a firm routine and sticking to it. The breed can be difficult to control; they will require a tight lead while they’re out walking, particularly during the early stages, and house training with the aid of a crate may be called for. But the results are more than worth it – a cocker spaniel can bring an enormous amount of joy and energy into your home, and they’ll give you the impetus require to get up and about yourself, too!