Dog behaviour is one of those things that is often discussed, we all know dogs are strange creatures. Sometimes they seem as cute and cuddly as a stuffed toy – then the next minute they’ve seen something and as they dash off to investigate you get a glimpse of the wolf inside.

Dogs use a different dialect of body language to human beings and in dog language making eye contact indicates that the dog is disagreeing with you. If your dog shows the whites of his eyes it should be taken as a serious sign that your dog is challenging you for leadership of the pack.

Not all staring is bad and sometimes the behaviour is known to be transient – for example if your dog repeatedly stares at you when dinner is due. In this case it can be translated as “Oi you!”.

A dog that is interested, but wishes to remain friendly, won’t stare hard but will look away and not maintain eye contact. You should not assume that your dog isn’t listening if he turns away during a training session – he may simply be acknowledging that you are the top dog.

Dogs tilt their heads to one side in a most endearing manner when they hear an usual noise or if they are listening to you. Dog ears aren’t quite the same as human ears – they’re more sensitive for one thing – so sometimes they tilt their head to hear the sound better.

They like to be able to see where the noise is coming from and if you are speaking directly to them they may tilt their head to get a better view of you – and to be able to gauge your body language more clearly. For the most part dogs communicate non-verbally so he may be trying to make sense of your intentions – and whether there’s anything in it for him of course! 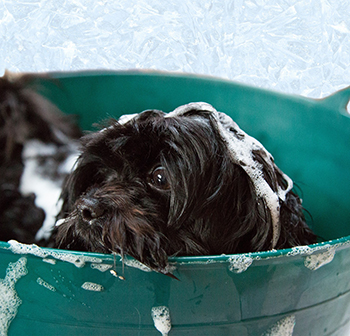 Not for him – for you. Dogs love licking their owners – although we often discourage the behaviour as it can be unpleasant to be washed by a meaty tongue.

Puppies will lick their mother’s mouth to encourage her to feed them – especially during weaning when she will give them pre-chewed food. Older dogs, if allowed, may try this on their humans to indicate that they are hungry and would like to be fed.  They will also lick around the mouth to submit to another dog – in essence they are saying “I’m just a little puppy please don’t be cross”.

When a dog licks his owner it helps them to relax as it releases endorphins which provide feelings of security and happiness. They also sometimes try and lick their owner’s sweaty skin – especially the hands and feet – apparently because they like the taste of the salt.

Oh No! Actually it is bath time…

Dogs love to find the most revolting things they can when out on a walk and have a good long roll in it. And when you’ve just managed to get one load of fox poo out of their coat they’ll go outside and find something else to roll in.

This has it’s origins in the wolf genes that still make up a large part of a domestic dog’s DNA. When hunting they will aim to mask their smell and one of the easiest ways to make yourself smell less like a dog and more like what you’re hunting is to find some poo and have a good long roll in it.

Remember that dogs have an extremely well developed sense of smell and it is part of their “language”. If they find something particularly fragrant they want to add it to their smell – possibly even as a way of showing off to their mates. Which is why, if given the opportunity, they will rub whatever smelly substance they’ve covered themselves in over your bed or sofa. They only want to share with their pack.

This also explains why giving your dog a bath is a fairly futile thing to do as they will simply want to cover up the smell of the shampoo with more of that lovely eau de fox.

Rabbits live underground so rabbit owners expect their pets to dig – that’s why rabbit runs are usually sold with a base and they owners are advised to provide plenty of bedding for the rabbit to dig in. Dogs don’t make burrows so why do they insist on digging and burying everything?

Again we need to look back in time to before dogs were domesticated. Once they had successfully camouflaged their smell and hunted down their prey they would bury what they couldn’t eat and return for it another day. This would have protected their kill from scavengers who otherwise would have finished off the carcass before the dogs could return to it.

Dogs don’t need to hunt for survival so they place the same value on other objects. Thus some dogs bury favourite toys in order to protect them from something.

Dogs are naturally quite intelligent animals and if not stimulated enough with daily walks, interesting toys and a busy household they can become bored and start exhibiting destructive behaviours. If your dog digs holes in the garden for no reason it may be that they need something to occupy their minds or longer walks to wear them out.

A third reason dogs dig is if there is an obstruction and they want to get to the other side. Thus dogs may start to dig and scrabble at fences – especially if next door have another dog or cat.

How to Read Your Dogs Body Language →