It would be putting it mildly to say that the Devon Rex is an animal with a distinctive appearance. If you’re looking for a cat that will stand apart from its peers, then there are few more suitable candidates. With their unmistakably extraterrestrial appearance, the Rex makes for an exotic addition to any household. The American Cat Fanciers Association describe the breed as a ‘cross between a cat, a dog, a monkey and Dennis the Menace. Their British equivalent, the Governing Council of the Cat Fancy, describe the breed as ‘resembling the Gremlins from the Star Wars films’ (doubtless to the considerable chagrin of Star Wars fans).

Whichever comparison you might want to draw, it’s clear that this is a unique breed. In this article, we’ll take a closer look at it.

Profile: What is a Devon Rex?

The Devon Rex is instantly recognizable, thanks to its enormous ears, its high cheekbones and a soft coat. Despite being known as a ‘pixie’, adult Devon Rexs are actually medium-sized. They’ve got long legs, small feet and large toes, which some owners report can even be used to pick things up. These unique feet give the animal a strange swaggering walk. 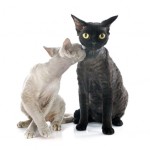 The Devon Rex is slight and slender, with a short nose and a squashed nose. The whiskers are crinkled and very fragile, and have a habit of falling off at the slightest provocation – but this is rarely something to be concerned about, as the whiskers will grow back in time. The tail is long and fine, and covered with short, distinctly wavy hair.

The Devon Rex has three different layers of fur, these being the guard, the awn and the down. The bottommost ‘down’ fur provides insulation, keeping the animal warm. The topmost, the ‘guard’, is only very thin, and provides only modest utility – but it’s key to creating the wavy appearance that the breed is so famed for. The fur comes in a few different colours and patterns, including solid, shaded, tabby and pointed varieties.

History: Where did the Devon Rex come from?

Unlike many breeds of cat, the Devon Rex is a breed which has come about only very recently. Happily, this means that we know exactly where it originated. All modern Devon Rexs are descended from Kirlee, a cat which lived in Devon during the 1960s, and which was unfortunately struck by a car in 1970. Kirlee was one of several kittens sired by a feral tomcat that had been living in a tin mine. Kirlee’s owner, a cat-fancier named Beryl Cox, chanced upon a story in the local paper about another similar cat that had been born in nearby Cornwall.

The Cornish cat had come about as a result of a mating between a wild tomcat and a tortoiseshell queen. Of the resultant litter, one kitten had been blessed with the distinctive Rex fur coat. Intrigued by the result, the owner, Nina Ennismore, decided to breed the kitten back with its mother to create a new litter of kittens. After some experimentation, Ennismore determined that the wavy rex fur patterns were a result of a recessive gene. This meant that the original cat, Kalibunker, would only produce more wavy-haired kittens at the second generation – and only when the first generation was bred back.

This meant that the ‘wavy fur’ gene would eventually have died out, had it not been for the intervention of Cox, who, with a heavy heart, agreed to sell Kirlee for the good of the breed. But things still didn’t go entirely to plan – the mating between the two animals produced a litter of straight-haired kittens! It was only when one of these kittens was bred back with her father that a litter of curly-haired kittens was finally born. Kalibunker and Kirlee were thereafter known as ‘Gene 1 Rex’ and ‘Gene 2 Rex’, and gave rise to two distinct strains of rex cat.

The Devon Rex is inquisitive and mischievous, and loves to explore. Being slender, it’s is capable of finding its way into every nook and cranny of your home – and you’ll often find them perching on high shelves, or exploring beneath the curtains.

They’re also very personable animals, and enjoy close physical contacts. Within just a few weeks of having a Devon Rex in your household, you’ll notice that they’re intensely affectionate, and human-loving. They’ll want to share every waking moment with their owner – and most will want to sleep near to you, too. If you’re working on your computer, they’re happy to snooze by your side, and if you’re sat on the sofa, then they make for excellent lap-cats. They have a playful nature, and are always looking to play games with you – what’s more, they’re intelligent enough to be taught some simple tricks.

This nature has a downside, however; if they‘re deprived of human company, Rexes tend to become miserable and lonely. For this reason, it’s best to buy them as a pair, so that the two animals can keep one another company while you’re not around. If you live with children, then this particular breed makes for an ideal playmate; they’re always looking to be entertained, and they’re passive enough to play nicely with anyone that’s willing to participate in their games!

Devon Rexes have an insatiable appetite and will greedily attack any food that’s put in front of them – and if you should leave a meal unfinished, they’ll leap at the opportunity to finish it on your behalf – whether it’s a plateful of chili con carne, or something more unusual like grilled vegetables, the Devon Rex is willing to give anything a go.

Popular myth holds that this particular breed is hypoallergenic, but there’s little evidence to back this claim up. Some allergy-sufferers will find that their symptoms are absent, others will find them just as strong as ever. If you’re prone to allergic reactions when faced with cats, then be sure to road-test any prospective purchase before parting with money.