The Turkish Van cat is a breed that has attracted widespread attention in the cat-loving world, thanks to its almost-unique affinity for the water. It’s among the only cats in the world that doesn’t fear the stuff – in fact, it’s been known to go swimming in it! 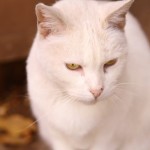 Let’s take a close look at this breed, at where it came from, and at whether it would fit nicely into your household.

Profile: What is a Turkish Van?

A Turkish Van is larger than the average cat. They’re relatively slow bloomers, with most not reaching full maturity until the age of three, but when they get there, they can weigh up to a stone-and-a-half.

The breed boasts a lush coat of ‘semi-long’ hair. Their fur straddles the boundary between the long fur of the Persian and the shorter hair of most other domestic cats. It’s traditionally a pale cream colour, though black, blue, tortoiseshell and tabby versions of the breed have since been introduced in recent decades. Many vans also have a spot of colour around their shoulder area.

Unlike cats which evolved in colder climates, the Turkish van has only this topmost layer of silky-smooth hair, with no woolly undercoat hiding beneath. This allows it to better cope with the hot Turkish summers. The ears and tail of this breed are fairly spectacular, with the former exhibiting striking tufts, while the latter being brushy and beautiful.

History: where did the Turkish Van come from?

As is the case with so many breeds of pedigree cat, the animal’s name offers a little clue into its origins. The breed is named after its homeland of Turkey, and the term ‘Van’ even refers to a lake in the country’s east. The ‘Van’ pattern has been traditionally restricted to that area, though the breed has spread across the globe in recent years.

We can glean a slight clue as to the animal’s origins from the legends that surround it. According to Abrahamic myth, when Noahs’ ark finally came to rest at the very top of Mount Aratat, it was this breed of cat that was first released. The distinctive mark on their shoulders is thought to have been left there by the Almighty himself.

Whilst it’s unclear exactly how long the breed has been domesticated for, we can be fairly certain that it’s been around in one form or another for a few centuries, thanks to its ubiquity in in middle-eastern folklore. There exists a huge amount of artwork from the 19th century depicting the animals sitting in the heart of a stifling Turkish Bazaar.

Things don’t become much clearer than that until relatively recently. In the 50s, a pair of British travellers, Laura Lushington and Sonia Halliday ventured to Turkey. They brought the two Van kittens back to the UK. From these two, an entire line of animals was to proceed. The pair returned to Turkey, having secured the support of several breeders and judges, and secured themselves another two kittens. Just a decade later, the breed was recognised at competition level, and from there it spread to the states.

Later, Lushington reflected on the decision to bring the animals back to Britain. She claimed that she knew that the animals were fiercely intelligent and adaptable, as they had managed to survive alongside human beings in the bustling and chaotic market environment of Turkey.

Personality: What is the Turkish Van like to own?

The Turkish Van is distinct from other varieties of cat in that it is comfortable in and around the water – so much so, in fact, that the breed has earned the unofficial nickname ‘Turkish Swimming Cat’. This isn’t to say that the cat will be happy to be picked up and thrown into a swimming pool; but they will be happy to investigate dripping taps, puddles, and bathtubs. If you’d like to see a particularly water-loving cat, then be sure to check out this YouTube video.

If you’re thinking of bringing a Turkish Van into your household, then you should be certain to leave your toilet seat down – as curious vans will inevitably seek to investigate them!

In Turkey, cats aren’t quite as mollycoddled as they are in other parts of the world. Street cats would need to be quite hardy, and – well – streetwise. Those that couldn’t interact with humans wouldn’t have access to the benefits they could provide – but those that became dependent on them would not be able to survive once this attention was withdrawn.

You can see evidence of this in the Van. They’re able to be extremely affectionate when they want to be, but they’re also fiercely independent. If you’re to spend an evening cuddling up with a Turkish Van, then the arrangement will be strictly on its own terms – and not yours!

The Turkish Van, being a semi-longhaired breed of cat, will benefit from the occasional grooming session. This will help to remove those troublesome knots and tangles, and keep the coat looking shiny and glossy. This is especially so for the tail, which is big and flurry. Fail to take care of this, and the cat will take matters into its own hands – and the result will be the occasional fur ball being ejected, potentially onto your nice clean floor!

The Turkish Van is not a breed which suffers from any maladies in particular. In fact, we’d go so far as to say that they’re healthy. Given that they’re bought from a reputable breeder and are vaccinated against common feline diseases, they should lead long and happy lives – with most surviving well into their teens. If you’re looking for a gorgeous, quirky cat that’ll bring bags of personality to your household, then look no further!