The Bichon Frise is one of the most adorable breeds of dog in existence. They’re small, they’re cuddly, and they’re achingly friendly – all qualities that have lead them to be beloved of dog-lovers looking for a pet that will love them in return.

Profile: What is a Bichon Frise?

Bichon Frise are tiny dogs. They’re often confused with poodles, and it’s easy to see why: they’re not only diminutive, but they have the same fluffy white fur coat and babyish expression 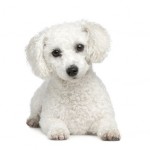 Despite their small size, the bichon isn’t classed in the ‘toy’ category; instead they belong to the more general ‘non-sporting’ category of dogs. They’re always white, but the exact shade of their coats varies somewhat; they can be cream or even a pale yellow colour. They have arched necks and fluffy tails, which gives them a playful look that matches their temperament.

Bichons are can divided into four different sub-breeds: The Maltese, the Bolognaise, the Havanese and the Tenerife. All four can trace their origins to the Mediterranean.

History: Where did the Bichon Frise come from?

As you might expect, the Bichon is closely related to the Poodle. It first came to prominence in the Mediterranean, mostly likely in Spain, and from there spread across the world thanks to its popularity with sailors.

On boats, the Bichon didn’t really serve any practical purpose other than that of a companion. Long voyages caused sailors to become lonely and disheartened, and the bichon’s affable temperament was just the morale boost that the sailors needed.

During the renaissance, these animals became hugely popular among aristocrats on mainland Europe, enjoying pride of place in palaces in both France and Spain, and are in evidence in many paintings of the period. By the 19th century, the breed was a common street dog, found throughout the continent. Its popularity enjoyed an unexpected boost in the 20th century, thanks in part to the success of Hergé’s serialised comic, ‘The Adventures of Tintin’, which featured a fluffy white dog named Snowy.

The first thing you’ll notice if you decide to give a home to a Bichon Frise is that they simply love to play with humans. They’re happy when you’re around; they’re generally sad when you’re not. This is because the bichon has been bred to be highly personable and attention-seeking. It will want to interact with human beings as much as it possibly can. This can be a problem if your schedule prevents you from seeing your dog – or if you don’t always want to spend time with it. In such cases, other breeds (or perhaps a cat) might make a better fit for your household.

If you’re out for long periods of time during the day, then your Bichon may become lonely and even depressed. If, on the other hand, you work from home – or you know that someone will be in the house to pay the dog attention, then the bichon might be right for you.

The bichon’s small size makes it an ideal pet for those living in small places. Consequently, they’re often found in apartments and bungalows, where they’re unlikely to be perturbed by feelings of claustrophobia. That said, a bichon needs just as much exercise as other breeds of dog, and will benefit from daily walks and games.

Bichons love to learn new tricks, and training is a great way to bond with them. They’re very good at it, being both intelligent and observant. Bichons require a slightly gentler tone than other breeds – you’ll need to use positive re-enforcement to get your message across, as if you’re too harsh, the dog will likely become upset. That said, you shouldn’t mollycoddle your bichon, as they can easily become spoiled and timid. Strike the right balance by having high expectations of your dog – in both new training and social situations.

The Bichon Frise’s famously fluffy coat will require regular grooming. If you’re so inclined, you might take the time to groom your bichon yourself. However, this is a great deal harder than it might first appear, and will require a little practice and technique to get right – to say nothing of the materials required. In most cases, it’s best to get an expert in to groom the dog properly on your behalf.

If you’re thinking of getting a bichon puppy, then you should be aware of their incredibly small size – they’re absolutely tiny, and as delicate as their size might suggest. This means that you’ll need to be extremely careful around them, particularly if your household contains other animals or small children. You’ll need to supervise their interactions with the other members of your household – and children should not be allowed to handle them without adult supervision.

Bichons, like most breeds, are susceptible to certain health problems. This isn’t to say that all bichons are likely to develop these problems, but it’s still worth making oneself aware of the potential risks before buying a dog for your household.

Being a smaller breed, bichons are prone to patellar luxation. This is a condition where the kneecap (or patella) luxates (or dislocates). In suffering dogs, the bone will slide in and out of place, resulting in pain which in some cases can be crippling. Young bichons are also prone to eye problems, and may develop cataracts. It’s impossible to know whether a particular puppy is at risk just by looking at it, and for this reason it’s important to make oneself aware of the eye health of the breeding stock – ask your breeder about the family history before committing to a purchase.

As ever, the best way to avoid problems is to seek out a reputable breeder, and ask to see proof that both parents were in good health, and that they’ve been tested for common genetic problems like hip and elbow dysplasia and hypothyroidism. Again, a good breeder will be able to provide this sort of evidence; a bad one will not.