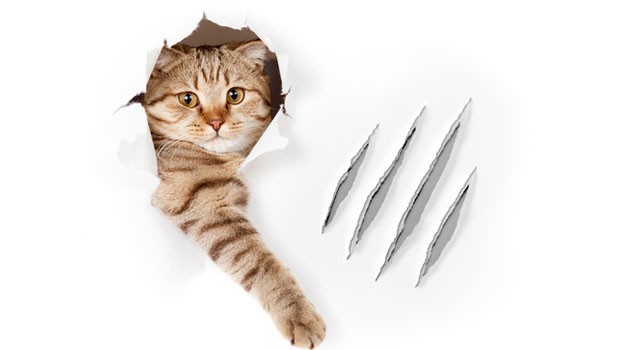 One of the things you probably see your cat doing a lot is scratching. This is typical feline behaviour that can be annoying and frustrating for those cat owners who don’t understand why they do it.

This post aims to look at understanding scratching and why cats do it, by understanding the reasons why your cat scratches so much you can try to make sure that he doesn’t damage your curtains, your furniture and anything else which he is drawn to.

You Can’t Stop Him Scratching

Don’t Punish Him for Scratching

Punishing your cat for scratching your new sofa or favourite curtains might be your natural first reaction. However, as well as making you feel bad, punishing him isn’t going to help stop him from scratching. In fact, doing this could make him feel nervous and insecure. If this happens then he could start to carry out other unwanted behaviour traits such as not using his litter box or scratching more often in more places. He could even lose his trust in you after a while, as he simply won’t understand the real reason you are punishing him. So why do cats scratch so much in the first place?

One of the main reasons why cats scratch at home is to mark their territory. By scratching where they live they can leave visible marks showing that they are the boss in this place. As well as this, they also release a special marking scent from their paws when they scratch. This is why he tends to choose prominent parts of his house to scratch.

Scratching to Get some Exercise

It is important that your cat gets enough exercise and scratching is one of the best ways of doing this. It is a great workout and allows him to stretch as well as to pull and work out the muscles in the front part of his body. If he were to stop scratching then he would lose an important part of his daily exercise routine.

Scratching Just for the Sake of It

It is also important to remember that cats also scratch because they really enjoy doing it. Just look at the sheer enjoyment on his face when he scratches and you will see that it is something that he gets a lot of pleasure from. Scratching is far from being some sort of chore that he feels obliged to carry out.

Give Him Somewhere to Scratch

Ok, so we know by now that scratching is something that your cats needs to do and enjoys doing. Bearing this in mind, we should look for a scratching post or someplace where he can scratch without causing any real damage. You will want one that is the right size for him, so look for a scratching post that is big and sturdy enough that he won’t knock it over when he is using it. There are many different types of scratching posts that you can buy in all sorts of different shapes and sizes. You might need to try more than one before you find one that he feels is perfect for him. For example, there are some cats that prefer a horizontal scratching board, while others are happier with a vertical ones. They are also made out of differing types of material. The closer it is to tree bark the better for him. No matter which one you choose, he may need some time to get used to it to start using it regularly.

Get Him to Use His Scratching Board

Some cats take to their scratching board fairly easily but others need some help. The first step in getting him to use it is to locate it in the right place. If there is a part of the house he always goes to scratch then try putting it there first of all. Some people hang toys from the scratching post or else show their cat how to do it by scratching it themselves. The main thing to bear in mind is that you should praise and reward him for scratching where you want him to do so. Rubbing or spraying some catnip onto the post can also work well in encouraging him to spend some time there. You may find that placing more than one scratching post around the house is necessary if he tends to scratch in different places.

Stop Him Scratching in Other Places

Finally, you will want to protect the furniture he normally scratches until such time as he stops being attracted to doing it. In some cases it could be as simple as closing the door to a room so that he can’t get in there. Another tactic that can work well is to apply masking tape or double sided tape to the pieces of furniture you want to protect. Cats don’t like the feel of this tape and might just give up scratching there. You could also try using special pet products that are designed to protect the surface of your furniture by making him look elsewhere. If he tends to cause problems in the house by scratching when you are out you could try putting plastic covers on the furniture. Another popular trick is to blow up a balloon and hide it under the covers. Then when he scratches the balloon will burst and he will get a shock, possibly causing him to avoid that place in the future.

One Response to Understanding Scratching and Why Cats Do It