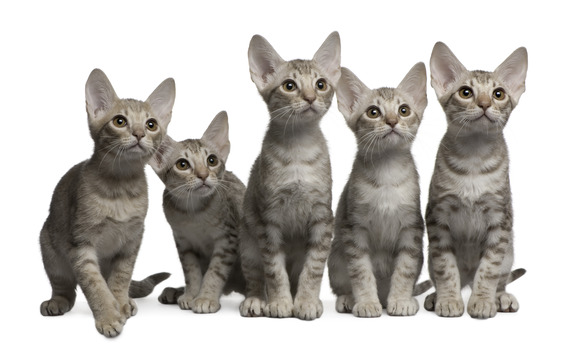 Domestic cats have been a part of the human story for centuries. But during this time, they’ve been largely without one feature of their wild cousins: spots. While leopards, cheetahs and ocelots are covered in spots, domestic cats are not – that is, with the exception of certain special breeds of cat which have been created with the explicit purpose of having a lush coat, covered with spots. The ocicat is one such animal.

Profile: what is an ocicat? 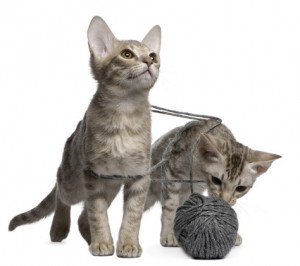 It’s not just the spots that it shares in common with its wild counterparts: the ocicat is a fairly sizeable breed, with the same high levels of energy that you might find in a wildcat. The cat’s skeleton and musculature is highly functional, and since its coat is so short, you’ll be able to see the body in action as the cat moves. Like most breeds of cat, males can grow to be slightly larger than females; the former peaking at around twelve pounds and the latter at around eight.

The breed comes in a dozen different colours – each of them covered with the characteristic spots that the breed is famed for. There are tawnys, lilacs, chocolates and cinnamons – and many more besides, allowing prospective owners plenty of choice when considering their new pet. The breed is allowed a wide variety of eye colours, with the notable exception of blue.

As you might imagine, the ocicat is only a relatively young breed, having first come about just fifty years ago in Detroit, Michigan. The first example of the breed came about as a happy accident, after a breeding of an Abyssinian with a Siamese. The owner of the curious new animal was Detroit resident Virginia Daly, and it was her daughter that came up with the name for the new breed – a rather obvious portmanteau of the words ‘ocelot’ and ‘cat’. The cat was named ‘Tonga’, and was quickly neutered and put up for sale as a pet.

The ad caught the attention of a feline geneticist named Dr. Clyde Keeler, who was keen to see a domestic cat that would display the same characteristics as some of the endangered wild species of the time. He set about replicating Tonga, and was able to do so without much trouble – which, when one considers the remarkable lengths to which breeders go to create new and interesting breeds, is almost miraculous. The new breed of cat was thereby born, and it wasn’t long before it was recognised by the American Cat Fanciers Association in 1966. Now, the breed is found across the world – and recognised globally, too.

Despite its association with wildcats, the ocicat’s nature is distinctly tame. It’s friendly and devoted, and longs for attention. Consequently, many owners have been known to remark that the breed shares more in common with a domestic dog than it does with the wildcat after which it was named.

Ocicats are a very intelligent breed that’s amenable to training. They can even be taught to play games like fetch, and can easily become quite possessive of toys – even if the item in question isn’t really a toy at all. If you see that your ocicat is developing a fixation on an item you’d rather they didn’t become attached to, then be sure to nip it in the bud and remove the item somewhere out of reach. Like all intelligent animals, there is the potential for the ocicat to develop a mischievous streak – but with consistent discipline and the right environment, these behaviours shouldn’t be a problem.

The ocicat is confident and outgoing, and therefore a great match with children. They’ll take great pleasure in play sessions, and will be keen to make the acquaintance of any new and interesting visitors to your household. They’re also excellent lap cats, and will make a point of jumping on their owners whenever they’re sat down for a long enough period.

Since the ocicat’s distinctive coat is so short, they don’t require much special attention when it comes to grooming. You’ll want to occasionally run a rubber brush through the animal’s coat (say, at weekly intervals) but since the ocicat is so happy to receive such attention, this might not prove too much of an ordeal. You might want to invest in a grooming glove, which will allow you to give your ocicat the attention it craves while simultaneously removing all of those unwanted dead hairs.

All of these qualities make the ocicat a perfect match for busy households where people are always coming and going, and there’s always someone to play with. By contrast, however, they’re not suited for empty houses. If left alone for long periods of time, the ocicat can easily become depressed – and so if you live alone, and you find that you’re often working late, then you’ll want to consider a different breed.

Similarly, the active nature of the ocicat makes it unsuitable for being confined to the house for long periods – unfortunately, the interesting nature of the breed might make owners wary of allowing it out and about. Be sure, then, that your house has enough distractions to keep the animal occupied, and enough space for it to run around in.

Though the ocicat is considered an exotic breed, they didn’t come about after long and incestuous selective breeding. As a result, they don’t suffer from any special health problems, and stand just as good a chance as any other cat of living a long, healthy and prosperous life. They have a lifespan that’s comparable to most other domestic breeds, with most living to between fifteen and eighteen years old.