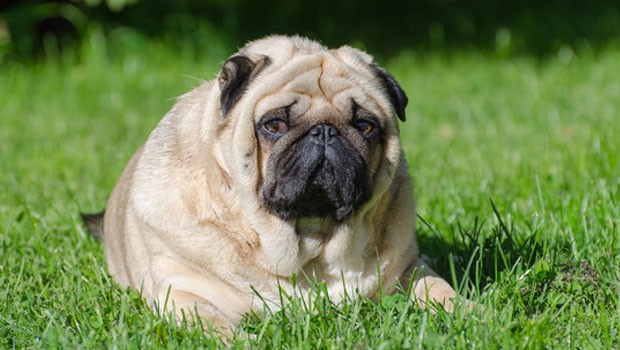 Obesity in dogs is as much a growing problem as it is in humans. Across the western world, human waistlines are expanding as we become more sedentary and our diets become increasingly rich in harmful sugars and fats. The same is true of our pets.

Obesity is defined simply as an excess of body fat. The condition is just as problematic in dogs as it is in humans. It can lead to a range of health problems if it is not tackled pro-actively. In this article, we’ll take a look at some of the causes behind this condition and look at ways it can endanger the health of our dogs.

Obesity is an easily understood condition. Its causes, however, are more complicated than popular wisdom might suggest. Some are environmental, while others are genetic.

There are some dogs which are genetically predisposed towards obesity. These include Labradors, Golden Retrievers and Daschhunds. If your dog is a member of one of these species, then they stand an increased risk of becoming overweight. For this reason, owners of such dogs should be especially vigilant when it comes to monitoring and controlling the animal’s caloric intake and levels of activity.

Female dogs are at greater risk than males. This is especially true of dogs which have recently given birth.

In order to maintain a level of body fat, a dog must take on board the same number of calories which they expend through metabolism. If a dog does not move very much, then it will expend less energy. This energy must go somewhere and so it is stored as fat.

Dogs, like humans, have evolved this ability through years of hardship. In the wild, it is absolutely crucial to survival. Fat reserves act as a buffer to protect the dog from starvation in long periods between meals. This allows wild dogs to eat huge meals very occasionally, thereby minimizing waste. This is part of the reason that certain foods which are rich in fats, salts and sugars are so delicious – our minds are programmed to find them palatable, because they are important to our bodies and in the wild, very scarce.

A domestic animal does not have to worry about scarcity. Foods rich in these incredibly palatable substances are readily available, because there is an enormous industry dedicated to making them so. The duty therefore falls to the owner to control the intake of the dog in order to prevent it from gorging itself too much.

Leaving diet to one side, exercise is also important. A sedentary lifestyle is also huge predictor of canine obesity. Inactivity, as well as failing to burn the calories which will then be stored as fat, will cause the dog’s muscle mass to atrophy, over time. This creates a vicious cycle, since this muscle also burns energy in order to maintain itself. 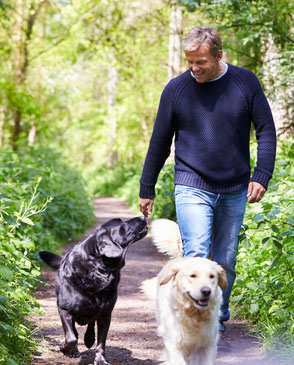 In order to maintain a healthy weight, it is therefore important to regularly exercise a dog. In adult dogs, this should consist of regular, strenuous walks. These walks should be brisk – sufficiently brisk that the animal is visibly tired when you return. Dogs which are restricted to the house will become easily bored and frustrated. They require stimulus in the form of exposure to new environments, new people and indeed, other dogs. Even the largest garden is no substitute for regular walks.

If a dog has not been walked for a while, then they may tire especially easily and want to return home. In such cases, it is important to gradually build up the dog’s fitness, in much the same way that you would build your own.

You should take your dog for a walk before you feed them. Exercising on a full stomach can lead to adverse effects like bloating. You should therefore ensure that the exercise is undertaken on an empty stomach – that way when you return, your dog will have worked up a healthy appetite.

Note, however, that puppies and small dogs will require a great deal less exercise than fully-grown bigger dogs. In fact, over-exercise in very young dogs can actually cause a great deal of harm – it can overstress their joints just as they are forming and thereby increase the likelihood that arthritis will develop.

As a rule, the Kennel Club recommend that dogs be exercised twice a day for five minutes per every month of age. So for example, a six-month old puppy can be exercised for half an hour twice a day. When the dog is fully grown, it is no longer necessary to ration their exercise quite so stringently – you should walk them until they are visibly tired.

An exercise program such as this can be of great benefit not only to the dog, but to its owner too!

Stress and depression will cause a dog to seek comfort in much the same way a human might. This comfort may come in the form of high-calorie food, which stimulates a rush of endorphins. This will help against the onset of depression. In other words, eating food will make the dog feel better. These endorphins are addictive and so comfort eating can quickly evolve into compulsive eating – a behavior which is more difficult to eradicate. If your dog is eating excessively and uncharacteristically so – then there may be an underlying condition which requires attention. Speak to your vet about the options available. It may be that there are behavioral therapies which can help to address the problem.

Fortunately, one of the leading tools in the battle against canine depression is also one which helps to limit canine obesity – and that is exercise! If your dog is frequently given brisk walks, then their endorphin levels will naturally rise – causing them to both feel good and to lose weight too.

We’ve examined the factors which contribute to obesity. But what about the conditions which it brings about? There are a number of them and many of them will be familiar to humans. Some of them have the particularly egregious effect of exacerbating the animal’s weight gain, thereby causing dangerous spiral effects. It should therefore be noted that where obesity is concerned, prevention is definitely better than cure.

Diabetes is just as serious in dogs as it is in humans. Diabetes is brought about by problems with insulin – the hormone required for the cells in your body to break apart sugars. The result of this is that the dog becomes eternally hungry, even when its levels of blood sugar are high. This is because its cells will be unable to metabolise sugar and will therefore send hunger signals to the brain.

The condition comes in two types. Type I is by far the more common and occurs when the pancreas cannot produce enough insulin. Type II occurs when the body responds improperly to the insulin that has already been created.

Diabetic dogs may display a number of symptoms. Their appetite may increase dramatically, or they may become lethargic or dehydrated. Their breath may also begin to take on a peculiarly sweet odour. If you suspect that your dog has contracted diabetes, then take them to a vet. Once the diagnosis has been confirmed, a vet may prescribe insulin therapy and recommend a few changes in diet – supplanting your dog’s normal foods with those which are high in fiber.

Hypothyroidism causes a dog’s metabolism to slow. It typically occurs during late middle age. The condition is easily identified, as affected dogs typically display a raft of different symptoms; the quality of their fur and skin may deteriorate and they may develop ear infections along with problems in their nervous systems. If you find that your dog refuses to lose weight, however much you restrict their diet, then hypothyroidism is likely be the cause.

A vet will be able to diagnose the condition by taking samples of the dog’s blood. Fortunately, hypothyroidism can be treated relatively cheaply using medication.

Osteoarthritis is an especially debilitating condition which occurs predominantly in older dogs whose joints have been exposed to a lifetime of rigor. When the cartilage between the joints has worn away sufficiently, the bones begin to rub against one another. This is a cause of intense and chronic pain for the animal suffering from it.

Obesity is a contributing factor to the disease’s development, for the simple reason that joints which are forced to carry more weight will degenerate more quickly. Furthermore, once the arthritis has developed, it is irreversible and one of its main effects is to inhibit the dog’s ability to move – which will exacerbate the obesity. In order to minimize a dog’s chance of developing this condition later in life, it is vitally important that their weight be managed.

Arthritic dogs are unable to move as well as they once did. They may have problems climbing stairs, or even getting up onto the settee. They may become irritable and less affectionate – as being cuddled with painfully jostle their joints. In particularly severe cases, they may have problems eating – as even the strain of chewing is too much for them to bear.