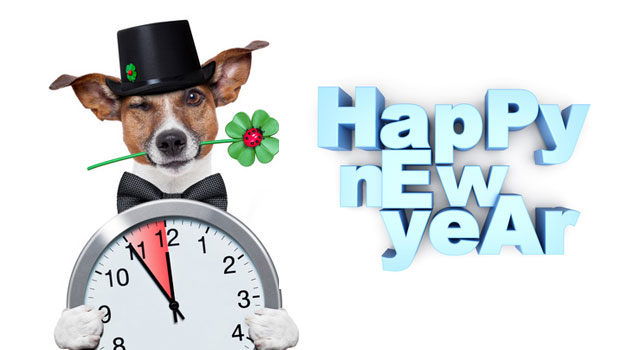 New Year Resolutions and Your Dog, for most people, the New Year invariably inspires a long list of resolutions – commitments to positive changes in your lifestyle, which are often surprisingly difficult to adhere to. But very few of these resolutions will benefit the household dog. Why should you make resolutions with your pet in mind too? Here, we shall briefly examine a few of the ways you can improve the happiness of your dog in the New Year.

Dogs explore the world using their noses and mouths – they like to chew things to find out what they are. In the case of many household objects, this approach can prove disastrous; there are a myriad of objects common in households which pose a distinct threat to your dog. These might include sharp objects, like knives, which should obviously be stowed safely away at all times. A number of household chemicals are also extremely dangerous to dogs and so should be given the same treatment. Antifreeze, cleaning products and alcohol are all examples of substances to which a dog should never be exposed to.

This is one resolution which is extremely common among humans – in fact, some might say it is the most common. We are all aware of the benefits of doing more exercise and so perhaps it is unsurprising that, when composing lists of resolutions, doing more exercise features so frequently. Your dog will also benefit from increased exercise; why not therefore kill two birds with one proverbial stone?

You will be far more likely to stick to your own fitness commitments if you are duty-bound to walk the dog as well – and so this resolution will prove a boon to both parties. Besides which, dogs which don’t get taken for walks invariably end up miserable.

Get the dog microchipped

One procedure increasingly popular among dog owners is microchipping – a solution which relies on technology to allow lost dogs to be identified. Any scenario in which a dog goes missing is the stuff of nightmares among every dog owner – which makes it all the more surprising that microchipping isn’t universal.

Perhaps the explanation might lie in confusion over what the procedure entails. You might imagine microchipping to be costly and difficult. The reality could not be further from that; it shares more in common with a routine injection than a surgical operation. The chip is painlessly implanted just beneath the skin of the dog in a matter of seconds. It is extremely small – around the size of a grain of rice – and so will not bother the dog in the slightest. The implant is a one-off procedure and once performed, it lasts a lifetime.

The chip contains a fourteen-digit code which will allow a vet (or any other suitably qualified person) to identify a dog and to obtain contact details for its owner. The procedure will improve the chances of dog and owner being reunited, should they ever become parted. If you are considering getting your dog microchipped, then speak to your vet about it.

Medical bills can quickly spiral out of control. You cannot get a dog treated on the NHS; you will need to insure them against possible illness and do so before problems develop! This way, if any problems do arise, you will not be faced with an uncomfortable choice between your finances and your dog’s well-being.

Is your dog comfortable with other dogs? Do you dread passing encounters with other dog walkers, because your dog is incapable of restraining itself from barking uncontrollably at them? A dog’s behaviour can suffer as a result of being kept isolated from other dogs. If your dog is lonely, it may become unhappy about it. This can be remedied by introducing another dog to the household – though for some, this may be impractical.

If another dog is out of the question, then why not take them to a training class? Not only will they learn some discipline, but they’ll have a space in which they can be exposed to other dogs, and allowed to interact with them.

Neutering is a process by which an animal’s reproductive organs are surgically removed. This will have obvious consequences, such as preventing females from becoming pregnant. But it will also result in more subtle behavioural changes. Neutered dogs are far less hormonal and aggressive.

In most cases, neutering is done to young dogs – though older dogs might certainly benefit from the surgery, too. Those considering neutering their dog should be aware that, as with any surgical procedure, there are risks involved. These risks are lessened by the prevalence of the procedure; Vets carry out this sort of surgery very often and this familiarity reduces the risk of problems brought about by human error.

While there are few reasons not to neuter a dog, a few do exist. Obviously, the procedure is permanent. You should be sure that you want to go through with it, since there is no going back once the deed has been done! Unlike cats, dogs have range of chemical alternatives available to them – though these carry risks as well. You should thoroughly discuss the possible implications of the various alternatives with your vet before making a decision.

Get your dog checked up

It can be tempting, if a dog appears happy and contented, to assume that it is healthy. However, appearances can be deceptive. Many of the symptoms of longer-term diseases do not become evident until the condition has progressed – by which time such diseases can be vastly more difficult to treat. On the other hand, if caught early, such diseases can be treated before they have any appreciable effect on the dog.

It is important that you keep an eye on your dog’s physical condition and to consult a vet if you see any marked deterioration. But even if you don’t you should still visit a vet for a check-up at least once a year. There could be no circumstance in which you would regret such a decision: Should the dog be given the all-clear, you will doubtless appreciate the peace of mind this brings; should any problem be identified, you will appreciate that you know about it so that action can be taken.