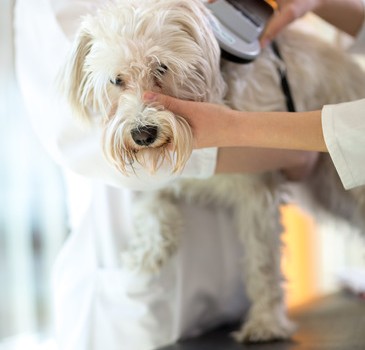 Every year in the UK, thousands of dogs are lost, causing great misery for the owners. Fortunately, every year, thousands of dogs are found again. A study by the Dog’s Trust looked at lost dogs between April 2011 and March 2012, and found that during that period 118,932 strays were found. Of these, 55,898 were reunited with their owners, while 6,900 were destroyed.

You might occasionally see a ‘dog found’ message on social media. But casting a net out into cyberspace is not the most efficient way of contacting a dog’s owner. And even if you do get a reply, you’ve no means of establishing for sure whether the person in question is actually the dog’s owner (they might be mistaken, or even lying.)

Traditionally, dogs have been identified using their collars. But collars are an imperfect solution. They can be damaged or removed, either accidentally or deliberately – and some dogs will simply resist wearing them at all costs. Fortunately, technology has provided us with a more subtle (and effective solution: microchipping. 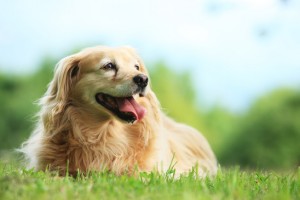 A microchip is a small implant, around the size of a grain of rice, which contains a tiny piece of computer memory. On this memory is stored a unique code, which can be cross-checked against a database in order to discover the contact details of a dog’s owner.

While a cybernetic implant like this might call to mind the idea of an invasive and expensive surgical procedure, the reality could not be more mundane – the implant is injected beneath the skin using a special needle. The procedure takes a matter of seconds, and can be performed with ease by a qualified veterinary nurse.

It’s a piece of technology which has spared many owners and enormous amount of worry and heartbreak. For this reason alone, it’s worth advocating. Indeed, it’s adoption among dog owners has led to a marked downturn in stray numbers.

Very soon, there will be a legal mechanism in place to ensure that every dog in the country is microchipped.

From the 6th April, it will be compulsory for dog owners across the United Kingdom to microchip their pets. Dog owners who shirk this responsibility will find themselves faced with a maximum fine of £500. Those who fail to pay this fine will have their pets forcibly taken from them, microchipped and registered, and then receive a considerable bill covering the cost.

This legislation comes as a result of a lengthy campaign by animal rights groups like the Kennel Club, the British Veterinary Association and the RSPCA – all of whom are well acquainted with the benefits of the technology. The law will bring the rest of the UK into line with existing laws in Wales. While exceptions exist for working dogs and dogs who can’t be microchipped for medical reasons, the vast majority of animals will have to be microchipped. Even in those exceptional cases, the circumstances will usually only grant a temporary reprieve.

The new law refers often to the ‘keeper’ of a dog. While this term might seem to be synonymous with the word ‘owner’, it actually refers to a quite distinct thing. A dog’s keeper is the person with whom it resides. The identity of this person is kept on the database, and it’s the legal responsibility of this person to inform the data of any change of ownership (or keepership, if you will). The keeper has the same responsibility if the dog dies – the database must be updated.

When should a puppy be chipped?

Puppies should be chipped when they arrive at their second set of vaccinations, at around the eight-week mark.

What’s the point of a change in law?

The majority of dog owners are responsible, and care a great deal about the welfare of the animal. Consequently, they’ll be more the willing to have their dog microchipped. Indeed, most of them already will have done.

Of course, there are exceptions to the rule. Unethical and stupid people have for a long time been able to treat dogs as a route to a fast buck. In doing so, they’ve inflicted a great deal of misery, keeping their puppies in dreadful conditions before selling them on the black market. In some cases, this practice has been industrialised, with enormous puppy farms spewing out a slew of unregulated animals.

Some dogs are also stolen. In such cases where the animal isn’t microchipped, it can be difficult to establish who the rightful owner is. It’s hoped that this new law will reduce such incidence, and offer owners a path to prosecution. What this will ultimately mean is a decrease in animal mistreatment.

How will this law be enforced?

Just as technology has brought about the microchip in the first place, it’s also brought about a means through which laws requiring their use can be enforced. The police and local authority will be equipped with scanners, allowing them to check for an animal’s microchip on the spot. From there, a time limit can be put into place, after which a fine will be issued.

What are the limitations?

No law is going to be utterly effective – if it were, then the courts would be deserted, and the police would spend their time twiddling their thumbs. There’s no reason to suspect that this one will be any different: those expecting a cure-all are in for a disappointment.

Chipping is undoubtedly a worthwhile practice. Of course, a worthwhile practice is only worthwhile if it’s actually – well – practiced. There’s very little point in keeping a dog microchipped if the information to which the microchip refers isn’t kept up to date. The National Dog Warden Association claims that the proportion of chips pointing to inaccurate information could be as high as 40%. Clearly, this law must be enforced vigorously if it’s to get this number down.

One Response to Microchipping and the Law