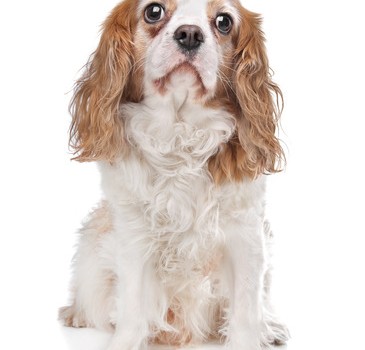 What is a King Charles Spaniel?

This sweet and charming small spaniel is considered a toy dog and is a very popular breed in the United Kingdom. It is also the 18th most popular purebred dog in the USA.

This dog has a beautiful long and smooth silky coat which comes in four different colours – chestnut and white (Blenheim), black, white and tan (Tricolor) and Ruby, Black and Tan. They are generally a very affectionate dog who are good with children and other animals – but they do require a lot of exercise and human interaction.

The King Charles Spaniel, also referred to as the English Toy Spaniel, refers to four separate types of toy spaniel under one single title. The other types of dogs that were mixed together into this breed included the Prince Charles Spaniels, the Ruby and the Blenheim.

Toy spaniels were thought to have originated in the Far East and they first started to appear in Europe in the 16th century. These spaniels got their name because they were associated with King Charles II of England. The King Charles Spaniels were primarily kept as lap dogs, as they were too small for hunting.

These little furry friends are a very loving, trusting and friendly breed, which means that they do not make good watchdogs because they are more likely to become friends with any intruder! The King Charles Spaniel is primarily a lapdog and loves the attention of humans. They are suitable for apartment living as they are quiet and small, but they should not be left alone for long periods of time.

This breed is also friendly with other pets, although be wary with smaller animals because they still have hunting instincts of their very early Spaniel ancestors.

These dogs are very affectionate with humans and have a calm and stable temperament, which makes them ideal for use in nursing homes and hospitals.

There are some health problems that are characteristic of this breed, so you need to keep a close eye on your pet and take them to the vet right away if you spot any symptoms.

The King Charles Spaniel can be prone to eye and respiratory system problems, like many small brachycephalic dogs.

Cavalier King Charles Spaniels can suffer from mitrial valve disease, which can lead to heart failure. This is a common cause of death in this breed and it appears in many Cavaliers at some point in their lives. It starts with heart murmurs which will then worsen progressively. According to a survey by the Kennel Club, approximately 42.8% of all deaths within the Cavalier are related to cardiac issues. Vets and cardiologists have developed breeding guidelines in order to help reduce the risk of these diseases – but it is not clear whether a significant number of breeders follow these guidelines.

King Charles Spaniels can also suffer from Syringomyelia, which is a condition that affects the spine and brain and causes symptoms that range from mild discomfort to serious pain and partial paralysis.

Hip dysplasia also causes issues in Cavalier King Charles Spaniels. It is not present at birth, but it develops over time with age.

This is a long haired breed so they need a bit of tender loving care when it comes to grooming. You will need to brush your spaniel every day to keep their coat from becoming tangled. Use a medium bristle brush, which will stimulate and spread the skin’s natural oils throughout the coat. Make sure that you brush the longer parts of the coat such as the back of the legs and under the tail, which will easily become tangled. Don’t forget the hair on the top of the feet which can also become tangled.

Since this breed has a lot of oil in their undercoat their fur is relatively water resistant, which means that you will need to shampoo them at least twice in order to break down the oils and remove them. Don’t wash your dog more than once per month though, as it will dry out their skin.

Here are some helpful tips to keep in mind if you are considering adopting a King Charles Spaniel:

Keep these tips in mind and you will find the perfect canine companion for you. A King Charles Spaniel can be a wonderful pet that you will love and cherish for many years.

One Response to Know your pooches – King Charles Spaniel