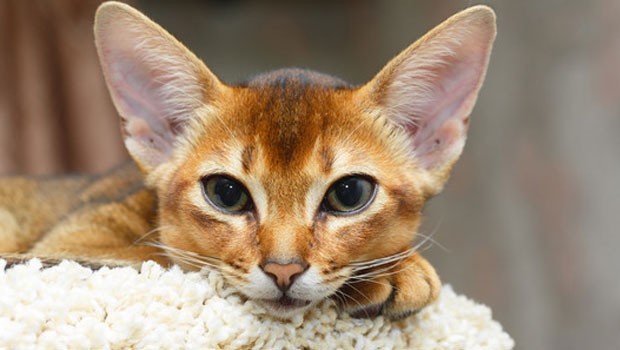 What is an Abyssinian Cat?

The ancient Egyptians are known for worshiping cats and it is likely that the cats they loved so much looked very similar to this modern breed. Abyssinian’s resemble the cats depicted on sculptures and paintings from ancient Egypt – with a long and elegant body, beautifully arched neck, almond shaped eyes and large ears.

They have an expressive face with almond shaped eyes and they have long legs too. Their paws are small and their tail is long and tapering. Their ears are alert and pointed. Usually the kittens are born with dark coats, which gradually lighten as they mature over several months. The adult coat is short, dense and fine and feels silky to the touch. The ticked pattern is usually uniform all over the body, although the hind legs, paws and the ridge of the spine and tail is often darker.

These cats are one of the most popular cats in the USA, mostly due to their friendly temperament. They are easy to care for and don’t require much grooming thanks to their short hair.

Recent studies have shown that the most convincing origin of the Abyssinian breed is from the coast of the Indian Ocean and Southeast Asia. The breed was refined in England, but its introduction to the country may have been the result of merchants and colonists stopping in Calcutta, the Indian Port. The colonists might have purchased animals from local traders, including these cats.

It is thought that the modern breed of Abyssinian originated from one female kitten in the 1800s named Zula, who was taken from Alexandria by a British soldier. The soldier brought the kitten back to England in 1868. This theory is not founded however, as the first cat listed as an Abyssinian was in 1882.

The first Abyssinians to be imported to North America from England came during the early 1900s and then in the late 1930s several top quality Abyssinians were exported from Britain to form the foundation of the breeding programs in the USA.

The Abyssinian is a very social and people-friendly cat. They want to sit next to you a lot and they are very loyal. Once you have bonded with this cat they will be your faithful companion forever. They will often want to be around you and know what you are doing pretty much at all times.

They are not really a lap cat, as they have a lot of energy and they always want to be exploring their surroundings. They love to sit high on a perch and watch the comings and goings around them. Also they are highly intelligent and they love to interact with their owners. They are a playful breed and they will play games as well as run and jump around.

This is not a good cat to choose if you live in a small apartment with no access to the outside. The Abyssinian loves to explore the world and will be unhappy when confined to a small space all the time. A big house with lots of room to roam and access to the outdoors is the best environment for this breed of cat.

The Abyssinian cat is a very low maintenance breed of cat, so it will be generally quite healthy. However, there are a few health issues that you should be aware of if you are planning to adopt one of these cats.

They are prone to developing a hereditary condition that is known as pyruvate kinase deficiency. This condition means that they are missing the key enzyme that regulates energy metabolism in their red blood cells. Cats that are deficient in this enzyme are likely to suffer from intermittent anemia.

This condition is hereditary and it is caused by a recessive gene. This gene can be easily removed from the gene pool through DNA screening. There is a test available that can determine whether or not a cat is a carrier of the disease. Other problems that this cat might be prone to having is kidney problems, hyperthyroidism, pyruvate kinase deficiency and retinal atrophy – which can lead to bad vision.

The Aby (as they are called for short) is a very easy cat to maintain because it has short hair. You can groom the cat weekly with a stainless steel comb, which will help to keep its coat shiny and remove dead hair. Make sure that you trim their nails every 10-14 days too. It is also a likely for Abyssinians to develop periodontal disease, so make sure that you brush your cat’s teeth on a regular basis with a pet toothpaste that is approved by your vet. Your cat should also have regular veterinary check-ups and teeth cleanings to make sure everything is under control.

Here are some tips to keep in mind when you are adopting an Abyssinian Cat.

Keep these tips in mind and you and your new feline friend will live happily ever after.