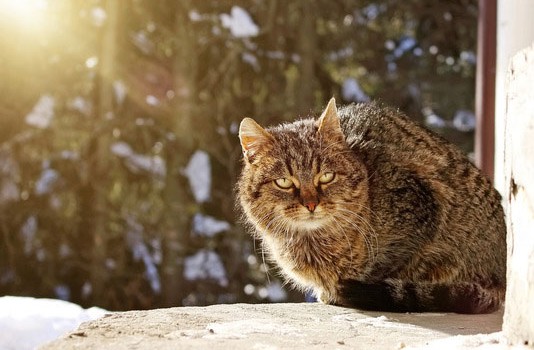 There is such a lot going on over the festive period that the welfare of the cat can seem like a secondary concern. This perception is re-enforced by the independent nature of cats, who, unlike dogs, project a constant air of knowing exactly what’s good for them. The winter months do, however pose a number of hazards for cats and cat-owners would do well to be aware of them. This post will discuss a few of the things you can do for keeping your cat safe this winter.

There are many occasions during winter when there will be noise. Christmas guests, once suitably inebriated, will create a ruckus which will intimidate many cats. While other cats will react well to new people, others will not. If your cat falls into the latter category, then ensure that they are reassured while you are entertaining. Provide them with a safe, quiet space where they can relax.

As has been noted, fireworks are also hugely distressing for many pets. While you might have some degree of control over your guests, the same cannot be said of fireworks being let off miles away.  While dogs are more vocal in their distress, cats will suffer, too. There are a few ways that this stress might be ameliorated, but the most important is to keep your cat inside after dark. Having done this, find your cat a nice, safe place which is familiar to them. Provide them with a litter tray too of course. You might also try to drown out the noise of the fireworks by having the television on loud, or by playing music with a regular beat.

During the festive period, most humans make a great deal of food available and will more often than not, overeat. In humans, such gluttony can lead to adverse health effects. The same is true of cats.

Christmas meals often produce leftovers and it can be tempting to offer this food to your cat as a treat. This can be harmless, if done in moderation. However, a cat’s digestive system will not be accustomed to foods designed for human consumption. Consequently, some foods, such as Christmas turkey, can cause trouble for cats if eaten in excessive quantities. When it comes to handing out Christmas treats, less is more.

The winter months also bring about another problem; one which exacerbates that caused by overeating:  Since the daylight hours are fewer, and the conditions outside grow more unpleasant, your cat will inevitably get far less exercise than they would during the summer.

There is little that can be done about this – indeed, perhaps little should be done about this, since a cat’s body has evolved to move less during the winter months. This highlights the importance of being careful how much food you give your cat.

Cold weather will also cause your cat a number of problems, just as it would humans. Low temperatures will exacerbate the symptoms of arthritis and cause frostbite. In cases of the latter, a cat’s ears and paws are unprotected by fur and so will be most vulnerable. Be sure to check them for symptoms. Ice and snow can also threaten your cat indirectly, as the grit and salt used to keep the roads clear from the elements can also cause irritation to a cat’s paws. Obviously, keeping your cat indoors will protect them from the cold – and that is, fortunately, where they will mostly want to stay during the cold months.

The clocks changing can confuse cats, as the rush hour moves an hour later and roads become suddenly crowded when they weren’t before. If you live near a main road, or in a built-up urban area, it is important that you keep an eye out for your cat on roads and near cars. Should your cat ever become lost, or involved in an accident, a microchip will aid the search hugely; cat owners should therefore certainly consider getting their pet chipped the next time they are at a check-up at the vets.

A lot of the plants which flower during the winter are highly poisonous to cats. Amarlyllis, Mistletoe, holly and lilies pose a particular threat, alone with the poinsettia plant, whose leaves contain an irritant sap, which can be poisonous if ingested in sufficient quantity. Fortunately, the taste will prevent most cats from doing this. Cat-owners wishing to err on the side of caution would do well to keep an eye out for such plants and keep them well away from their cats.

Perhaps the greatest danger winter has for cats (or, indeed, any household pet) is that posed by antifreeze. Antifreeze poisoning is extremely dangerous and can cause fatal kidney damage within a matter of hours if not treated. This danger is made all the more greater by the fact that, unlike poisonous plants, antifreeze has a sweet taste which will lead many cats to unknowingly lick their paws after having stepped through it.

It may seem perverse that such a deadly substance would have such a sweet taste. The culprit is ethylene glycol – an alcohol derivative which is extremely effective at lowering freezing points.   There are a number of things you can do to minimise the danger to your pet.

The first is simple diligence. Watch for puddles around the car which might indicate leaking antifreeze. The substance is often – though not always – a greenish-blue colour.

When shopping for antifreeze, cat owners would do well to avoid more toxic varieties in favour of less toxic ones. Propylene glycol, for example, is preferable to ethylene glycol – its toxicity is sufficiently low that it is even used as an additive in children’s cough syrup. The downside is that propylene is far more expensive – but most cat owners would consider that a price well worth paying!

It is commonly-held belief that fleas pose a lesser risk to cats in winter than they do in summer, this is however completely incorrect.  The main issue with  this train of thought is this; fleas require heat in order to reproduce. However, this belief has led to many cat-owners becoming complacent during the winter. Central heating provides the necessary heat for fleas to spread and breed and complacency among cat owners provides the opportunity for them to do so unhindered. So it is so important for you to continue your pet flea treatments throughout the year.

These are just a few ways that cats can become injured during the winter months. Hopefully the advice given here will help to prevent this. Make sure to keep an extra eye out for your cat during this hazardous season.