The Egyptian Mau is a hugely elegant, attractive cat. Consequently, it’s greatly prized by cat-lovers around the world. They’re uniquely styled, with a distinctive spot-covered coat of short 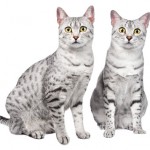 fur, and they’re intelligent and devoted to their owners. All of this contributes to an air of exotic intrigue and mystery that many fall in love with.

It’s a breed with a romantic history – so much of the mythology of Ancient Egypt revolves around cats, and so it’s perhaps unsurprising that they continue to be venerated to this day. Let’s take a closer look at this fascinating breed, and see exactly why so many are so enamoured with it.

Profile: what is an Egyptian Mau?

In appearance, the Egyptian Mau can be placed somewhere in between the Burmese and the Siamese. It manages to display both the stockiness of the former, and the litheness of the latter. The cat has a medium-length body, but its hind legs are a little longer than its front ones. This quality makes them somewhat similar to its wildcat cousins, whose rear limbs are powerful enough to propel them several metres into the air, in pursuit of the fleeing birds that they hunt.

These long legs also allow the Mau to run much faster than other domestic cats. The fastest Maus are known to reach speeds of more than 30mph. Moreover, a mau has a distinctive flap of skin which stretches from the middle of its abdomen to its rear knees. This flap allows it to easily maneuverer at high speed.

The mau’s amazing coat comes in several different colours – including silver, bronze and smoke. It’s the only naturally spotted domestic cat – and so is easily distinguished from other breeds. The mau’s trademark spots, however, are only on the edge of its fur – you won’t find them buried further within. A Mau’s purr is also very distinctive. They’re capable of emitting a wide variety of squeaks and squawks – but in a musical way that isn’t likely to drive any nearby humans ballistic.

Mau’s are also notable for their eyes – they’re large and expressive, and, bizarrely, change colour as the cat matures – from a bright green to a duller shade of turquoise. Around the rim of their eyes is a ring of darkened fur, which acts like a layer of mascara, making the eyes stand out, and appear even more beautiful.

Mau’s also carry an unusual feature on their foreheads, which separates them from other breeds. Between their ears, you’ll be able to see either an ‘m’ shape or a ‘scarab beetle’ shape. This marking gives a strong indicator of where the cat’s family history lies. The former are associated more with Europe, the latter with the Americas.

History: Where did the Egyptian Mau come from?

You might suspect that the origins of this particular breed are obvious. Not only is the breed named after its supposed country of origin, the word ‘Mau’ is derived from an Egyptian word meaning ‘cat’.

Ancient mau’s were so highly prized in ancient Egypt that some of them were mummified along with their royal owners. Look through a set of hieroglyphs on an Egyptian tomb and you’re likely to see the distinctive outline of this famous cat represented. This preference for cats was most abundantly evidenced in the cult of Bastet, which persisted well into roman occupation. But Bastet was just one of many cat gods created by Egyptian religionists in honour of their favourite pets. In fact, so beloved were cats in ancient Egypt, that treating them cruelly or disrespectfully was punishable by execution – an idea that will perhaps appeal to many of the cat-lovers reading this!

It must be noted that despite the origins of the breed being agreed upon, recent DNA evidence has thrown the origins of the breed into dispute. Modern geneticists have performed analyses which link the breed to those of Europe and North America. So, while it’s certain that cats were venerated in Egypt, it’s unlikely that those cats held much in common with the modern Mau. Nevertheless, the legend of the Mau thriving in ancient Egypt has achieved such traction that it will likely survive even the most compelling evidence to the contrary.

The modern Mau is thought to have been first bred as recently as the mid-50s, in Italy. Natalie Trubetskaya, a Russian princess exiled from her homeland during the Second World War. The legend tells that she was given a silver, spotted kitten by a local boy, who in turn had been given the cat by a middle-eastern diplomat.

Trubetskaya determined that the cat was an Egyptian Mau, and resolved to collect as many as she could and thereby preserve the strain. Fortunately, she was well connected politically, and so was able to assemble a suitable group of cats from which to breathe new life into the strain. It’s thought that most modern Mau’s are derived from this small clutch of cats. Just a few years later, in the late 60s, the breed was recognised by breeding associations, who bestowed upon it championship status. And from there, the ascent of the Mau was unstoppable – it’s one of the most sought-after breeds of cat in the world.

Personality: What is an Egyptian Mau like to own?

The Egyptian Mau has a very strong sense of property. They’ve been known to get a little possessive about their toys – just try and take a toy away from one of them and see what happens! They’re similarly possessive about their owners – if they perceive a rival for their attention, then they’ll be unhappy about it.

The breed makes for an excellent family pet, and will happily interact with other members of the household – including children, other cats, and even dogs. They’re low-maintenance, too. They have only a very short coat of hair, and so grooming them is very straightforward. Being genetically close to certain naturally-occurring species of wildcat, the mau is not prone to any of the genetic disorders which affect other breeds. In fact, they can often live to fifteen years old and beyond.