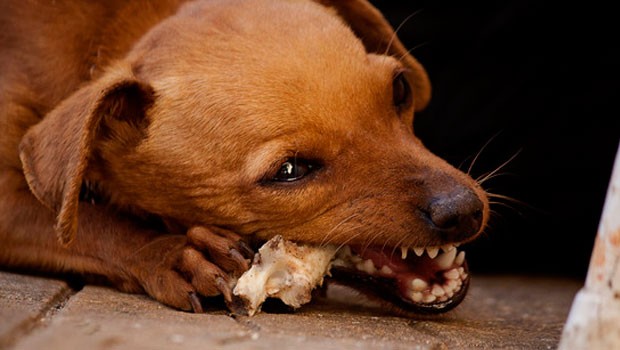 Dogs chewing is a perfectly normal and indeed, healthy behavior. After all, they interact with the world primarily through their jaws and nose – these are the means by which they pick things up, examine things and of course, eat and drink. They also chew for the simple reason that they find it a fun thing to do.

However, as much fun as it undoubtedly is for the dog, this sort of behavior can be disastrous for the item being chewed upon. Some objects, moreover, can be dangerous to the dog if they should be chewed on or swallowed – sharp objects, for example, might damage the dog’s mouth or gut. In some cases this can pose a very real danger of the dog choking.

In this article, we’ll take a look at some of the ways in which these threats can be mitigated.

It’s worth starting at the beginning of the dog’s life. When a puppy is very young, they learn about the world through their mouths. They do this by chewing everything that they come across. Items which carry a scent of human make for the most interesting and attractive playthings, which is part of the reason that shoes are so vulnerable to the dog’s attentions.

If you intend to bring puppies into your home, then prepare yourself for an onslaught of destruction. You will need to stow certain items beyond your puppy’s reach. These might include glasses and mobile phones. Make sure that your dirty laundry is stowed in a closed basket – an open one is vulnerable to being raided by a curious canine.

There are some items, however, which cannot practically be moved. These might include furniture legs and doorways. You can deter your dog from chewing on these by making them smell and taste bad. This can be done using citronella oil or with a bitter apple spray. This will go a long way toward aiding you through this difficult time in the animal’s development.

Teaching the dog not to chew

As with any problem behavior, it is important to convey to the dog that what they are doing is not acceptable. This can be done simply by saying the word ‘no’ whenever you catch them chewing something that they are not supposed to. You can then remove the object and replace it with one which is more appropriate – such as a chew toy. By doing this, the dog will learn to recognise the word ‘no’, and desist from chewing that particular item.

Of course, you cannot communicate to the dog exactly why they aren’t allowed to chew on certain objects. Equally, they may take your ‘no’ to be a conditional one and assume that they are in fact allowed to chew on certain objects – just not while you’re in the vicinity. This means that you may return from a trip out to find that they’ve torn all of the pages out of your book.

This brings us to another problem with teaching the dog – you cannot retrospectively punish them for this behavior. Even if you thrust your ruined paperback into their faces and exclaim ‘look at what you have done!’ they will not comprehend exactly what it is they have done – especially not if they did it hours ago, they will merely react to the anger they sense. Even if your interrogation produces a doleful expression on the dog’s face, you won’t have elicited any guilt or remorse – or even recognition that they’ve done something wrong. They’ll just be upset because you’re displeased and they won’t understand why. Not only is this sort of punishment ineffective, it can cause other behavioral problems. You have to catch them in the act to be able to re-enforce that their behavior is not acceptable and if you do not, then you should simply move on.

Clearly, there is room for misinterpretation. And it is for this reason that the first strategy should be to move any vulnerable objects out of your dog’s way. This way, the dog will have no opportunity to destroy any of your prized possessions.

It is important that you do not give your dog mixed messages. If the dog is reprimanded after chewing shoes, and then you later decide to give it an old show to chew on, then this will only serve to undermine all of the conditioning you’ve done and confuse the dog.

Similarly, you should avoid chasing the dog around the house and garden in order to retrieve your shoe. While this might provide Benny-Hill-esque amusement for any spectators, it will do little to discourage the behavior. After all, there is no greater reward for your dog than your attention – by chasing after the dog you will be giving it exactly what it wants and so encouraging further chewing behavior.

The dog will view the situation as a game. In order to avoid this, you should stand and ignore the dog, and wait for it to desist before retrieving whatever is being chewed.

Provide your puppy with alternatives

While it would certainly be nice if your puppy exerted a little self-control, it is rather difficult to persuade one to do so. A better strategy is therefore to redirect the dog’s destructive energy toward an object more capable of withstanding it. There are an enormous range of rubber chew toys which your dog might find attractive, along with others which serve as containers for food treats, so that your dog might spend a longer period of time trying to get inside and thus feel more rewarded at the end.

It’s worth nothing here that you should never give your dog toys which are designed for humans. These toys are not designed to be chewed upon and they may fragment into small, sharp pieces which can present a choking hazard for your dog.

There are a few different ways of getting the dog’s interest in a new chew toy. One effective strategy is to ensure that your scent is on it. A dog’s sense of smell is a great deal keener than yours is, so you don’t need to go to extremes to do this – just rub the new toy between your hands and then give it to the dog.

If you do not take steps to control your puppies chewing behavior, then it may persist into adulthood – and by that point it will become a great deal more difficult to curtail. Provided that you maintain discipline, the chewing behavior will disappear as the dog grows older – though with some dogs, this can take longer than it does with others. In retrievers, for example, the behavior may continue for a few years.

Tire your dog out

If your dog is full of energy, then that energy will be channeled into something. Given the choice, your puppy will likely channel it into destruction. If your dog is chewing excessively, then it may be that it is simply not getting enough exercise. Dogs should be walked regularly, in order that their energy levels be controlled. Walking is also an essential component of dog ownership for a number of other reasons – it will help to guard against depression and obesity, along with all of the associated maladies.

That said, particularly young puppies should not be walked as often or as intensively as older dogs. This is because their joints have yet to properly form and are therefore at heightened risk of running into problems if they are repeatedly jostled and exercised during the formative years. This means that the puppy should be walked only sparingly. The Kennel Club recommend that this consists of five minutes of exercise for every month of the dog’s life; so a six-month-old puppy should be walked for only thirty minutes at a time.

There are some instances where persistent chewing behavior can evidence an underlying pathology. If your dog simply will not stop chewing on things, then you should take them to a vet.

It might be that your dog’s destructive behavior only occurs under certain conditions. For example, it might only occur when it has been left on its own. Separation anxiety is a problem more prevalent in dogs which come from shelters than those which are raised in the same home since puppyhood. It is therefore thought be linked to a stressful experience. If your dog also exhibits other behaviors, such as barking, whining, urinating and defecating, then it may well be suffering from separation anxiety.

Phobias are related to anxieties, but they are triggered by specific events, such as fireworks or thunderstorms. Since Guy Fawkes celebrations now seem to have evolved into a week-long event, it is particularly important to reassure your dog during this time. Ensure that it is given its own space and plenty of distractions.

Obsessive-compulsive chewing behavior occurs when the dog chews so much that they cannot stop. It typically becomes worse when the dog is anxious, bored or stressed. It can only be removed by intensive and potentially stressful behavioral therapies.