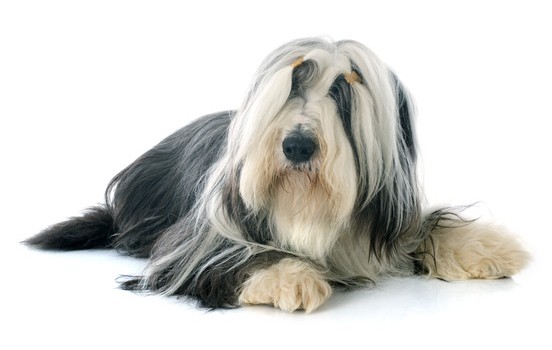 The highlands of Scotland have long been home to sheep farmers. The terrain there is so vertiginous that it’s unsuitable for any other form of farming – but sheep are able to navigate it without too much trouble.

In order to herd these sheep, however, it became necessary to breed a dog that was rugged enough to withstand the harsh, cold climate of Scotland during the winter, and yet agile and mobile enough to move quickly over steep slopes, and thereby outmanoeuvre the livestock.

The answer to these problems came in the form of the bearded collie – an animal that’s famed for its thick, shaggy coat and relentless energy. In this article, we’ll examine the breed in closer detail, see if we can make sense of its murky history, and see how it might fit into your home! 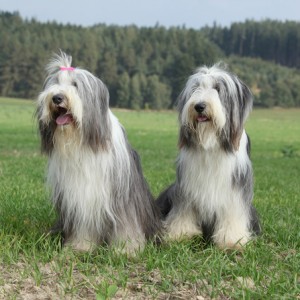 Profile: What is a Bearded Collie?

The bearded collie’s most notable feature is its distinct, thick coat. This coat consists of two different layers; there is an outer layer, whose role is to repel moisture, and the inner layer, which is thicker and acts as an insulator. This hair flops down on either side, particularly around the head – which is what gives the breed its eponymous bearded appearance.

A bearded collie is, like most breeds of dog, sexually dimorphic, with the male being larger than the female – but this difference is only very slight.

History: Where did the Bearded Collie Come from?

The history of the bearded collie is shrouded in mystery. Like many famous breeds, there are myths surrounding exactly how it came to be, but there’s no way of verifying the substance of these myths. The most persistent of these states that in the 16th century a polish merchant brought a group of six Polish Lowland Sheepdogs to the country, and that the local farmers were so impressed that they bought the dogs and began to breed them with local Scottish dogs.

The modern breed, however, can trace its origin back to much more recent history. A breeder named Gwendoline Olive Willlison secured herself a bearded collie, entirely by accident, having ordered a Shetland Sheepdog. She then chanced upon another Bearded Colllie, and then began to breed them.

These two dogs were known as Bailie and Jeanie of Bothkennar, and they’re the founding members of the modern breed. She helped to form the Bearded Collie Club in 1955, and the breed was recognised shortly thereafter by the Kennel Club. The breed wasn’t exported to the states until a decade later, with the American Kennel Club acknowledging it in 1977. Since then, it’s proven tremendously popular, and this popularity has been boosted by its appearance in popular television and film, and its victory in Crufts in 1989.

Bearded Collies are intelligent and affectionate, and they’re always willing to join in whatever fun might be going on around them. They have exceptionally high energy levels, and are therefore only suitable for those willing to provide an outlet for that energy. If cooped up indoors, they can easily become destructive – and so daily walks are a must. Ideally, they should have access to a garden for exercise during the day.

In order to guard against behavioural problems, it’s important that collies are given the right environment and consistent, firm discipline. This should ideally be started when the dog is a puppy. They’re vocal animals, and will often bark as a way of greeting strangers and alerting you to a problem. Coop them up at night-time and you’re certain to know about it!

Bearded collies also require frequent grooming, thanks to their enormous fur coat. This should occur at least at weekly intervals, and perhaps more often than that during periods of heavy shedding. If you prefer, you can get this done by a trained professional – but learning to groom your dog yourself might prove a wiser investment in the long run, as it’s a skill that will be called upon again and again throughout your dog’s life. Be sure to use grooming products which are specifically designed to meet the needs of dogs, as human shampoos can contain irritating chemicals which can damage a dog’s hair and skin – which is precisely the opposite of what you should be doing.

Like most breeds of dog, there are a few healthy problems to which the bearded collie is predisposed. This is not to say that all – or even most – animals will get these diseases, but that the statistical risk is demonstrably greater.

Suffice to say, in order to give your Bearded Collie the best possible chance at a long and healthy life, it’s vital that you buy only from a reputable breeder – one that’s willing to provide you with proof of the dog’s parentage, and that will allow you to see the mother.

This condition causes the thyroid gland to produce less than the required amount of metabolism related hormones, which interferes with your dog’s ability to regulate its appetite, and become slow and lethargic. Dogs suffering from the condition might also suffer from coarse fur and tough skin. Identified early enough, this condition can be managed through medication. Be sure that you pay careful attention to your dog and its weight, so that you can better notice health problems when they occur.

This condition occurs when a dog’s thighbone doesn’t fit into the socket in the hip. This causes the dog to have trouble walking, until they eventually become lame. This is often a genetic condition which is passed down through the generations, and so any dog suffering from this condition should not be allowed to breed. As such, the best defence against it is quality screening at the breeding stage. There are, however, other factors which can cause the condition to manifest – injuries resulting from large falls, or sudden growth spurts or obesity, can also cause the condition to manifest. Be sure that you’re feeding your dog foods that promote good joint health, particularly later in its life, in order to provide it with the best chance of resisting this condition.