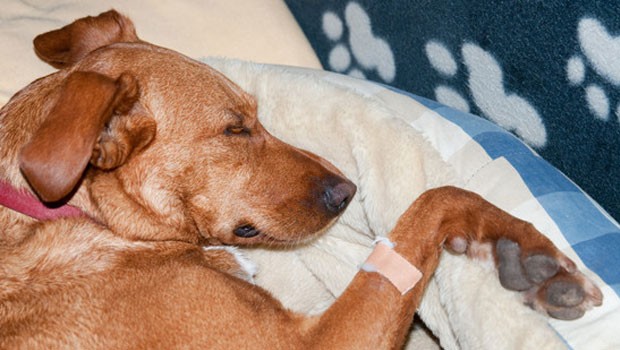 Television adverts for pet food take great pains to tell us of the supposed benefits their product will confer. Changes in diet can, according to the marketing: ensure healthy teeth and gums, maintain a glossy coat and keep a dog trim, happy and generally well off.

There can be no denying that these claims are often embellished. But, on the other hand, there can be no denying that proper nutrition is one of the most significant contributing factors to a dog’s health. In this article we’ll take a look at some of the common dog illnesses impacted by diet which can afflict a dog when that diet is not quite right and take a look at how to solve it.

The first dietary problem is perhaps the most obvious – the dog develops an excessive amount of body fat and becomes obese. Obesity is a real problem for dogs, as it can bring about a whole host of nasty conditions, like heart failure, high blood pressure and diabetes. It can also increase the likelihood that a dog will develop arthritis in its old age, as it will place a greater weight on the dog’s joints.

What’s more, obesity perpetuates a vicious circle – if a dog becomes very fat, it will be less inclined to exercise. And if it does not exercise, it will grow fatter. Clearly, some intervention is in order; and sooner rather than later!

When you take your dog for a walk, ensure that they have slowed down by the end of it. Dogs often have a great deal of energy – if they’re not tired out by the end of a walk, that energy will be stored as fat. Furthermore, try to restrict the amount of food they get – you might also want to place them on a special diet. Your vet will be able to offer further advice in this regard.

Heart disease is often brought about by obesity, but obesity is not the only influencing factor. A high level of dietary salt can also be to blame. If you are in the habit of feeding your dog scraps from the table, then you could be placing them at risk.

The problem, from your dog’s perspective, is that salty foods taste delicious. Undoubtedly, many humans will be able to sympathise with this. A dog’s ancestors could roam for days on end without finding any salt – and so when they did find it, they would need to eat a lot of it. Dogs therefore developed a taste for it and pet food manufacturers seek to exploit this taste by putting a little salt in their dog food. Unfortunately, your dog’s digestive system to not evolve to deal with the modern world of pre-packaged temptation – and it certainly didn’t evolve to deal with the tasty crisps and treats we humans often leave lying around the house.

If you suspect that your dog is eating too much salty food, then talk to your vet about the alternatives. In the long run, it can save you a great deal of heartache and give your dog the best possible chance to enjoy its latter years.

When people think of a malnourished dog, the image that most often comes to mind is of one that is emaciated filthy stray, without a loving owner to care for it. While it’s certainly true that stray dogs are more likely to suffer from malnutrition, it’s not the case that all malnourished dogs are strays. Even in loving homes, a dog can have difficulty getting hold of the right combination of nutrients.

Malnutrition is such an all-encompassing term that it is difficult to isolate just one or two symptoms. The state of a dog’s coat can often be a clue – if it is dull and lifeless, and populated with flakes of dandruff, then it is likely that a lack of proper vitamins is to blame. Similarly, a malnourished dog’s teeth may also show signs of decay; they may have less energy and appear depressed. In some severe cases, they may vomit bile.

Ensure that you feed your dog proper dog food from a reputable brand. If you suspect that your dog is malnourished, then you should take it to the vet to investigate further. It may be that you are making a simple error in diet, which can be easily corrected – this will save a great deal of pain later on.

Some forms of malnutrition, specifically those relating to fibre intake, will manifest themselves in the form of diarrhoea. Broadly speaking, diarrhoea comes in two forms: small bowel and large bowel.

The former means that the dog will produce a large about of faeces a few times a day. It can be addressed by feeding your dog blander foods which are low in fat. This will reduce any digestion problems.

The latter, on the other hand, means that the dog will defecate fairly constantly. This needs to be addressed using a diet which is high in fibre. Fibre comes in two varieties – soluble, which is broken down by bacteria in the gut and insoluble, which cannot be digested. The presence of both of these will slow down the dog’s digestion process to a healthy rate and ensure that it can get on with its day without having to constantly relieve itself.

Just as some humans can develop allergies to certain forms of food, so too can dogs. Allergies usually appear in the form of irritation to a dog’s skin and gut. A dog suspected to have developed an allergy should be taken to a vet – it is better to be sure of the problem than to proceed from false principles.

If it should turn out that your dog is allergic, then don’t despair! There are many food options available to such dogs and therefore no reason that they should no lead perfectly normal, fulfilling lives. You will just need to be vigilant where your dog’s food intake is concerned and know exactly how to react should you notice that your dog is suffering.